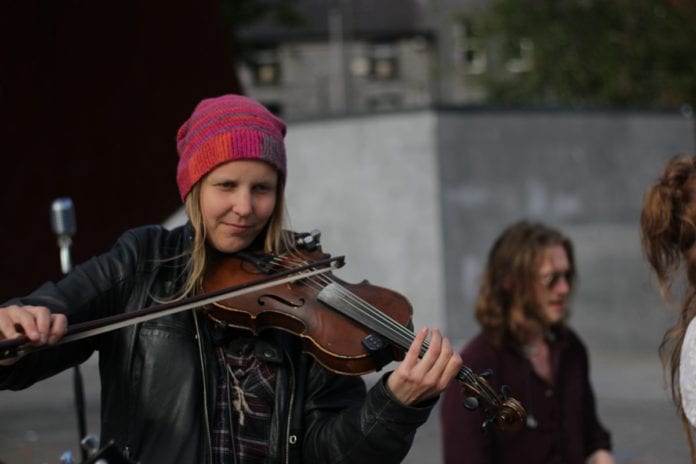 The Galway Buskers Community has warned that the new busking bylaws voted in this week will force many to leave Galway to make a living.

Galway City Council voted this week to adopt a set of busking bylaws which will place restrictions on how and when performers and musicians can play on the city centre streets.

The bylaws ban all use of amplification with instruments or backing tracks before 6pm, with other restrictions being placed on ‘circle acts’ that attract large crowds, and on the age of performers.

Performers under 16 must have a parent or guardian present in order to perform on the street, and the use of snare drums has been banned altogether.

These restrictions cover a protected streetscape from the top of William Street, along Shop Street, High Street, and Quay Street.

The Buskers Community said that when the bylaws come into effect next January it will be “diminishing a huge and very recognisable, oft-lauded part of Galway’s cultural landscape at the very beginning of the City of Culture year.”

“Members of our community include considerate, talented contributors to Galway’s famed artistic landscape, not to mention active members of the wider community.”

“We live here, we shop here, we bring our music and art to the streets for all to enjoy.”

Those on the city council in favour of the bylaws said they were needed to protect businesses in the city centre, arguing that commerce is being restricted by large crowds and excessive noise.

While councillors opposed to them have expressed concerns about potentially damaging a well known aspect of Galway with visitors.

The Buskers Community insists that their own voluntary code of conduct is more effective, and already has 95% compliance among the city’s buskers, while the bylaws create an “us and them” environment.

“If we had city hall to stand behind us and our code we would have even greater compliance, even faster. We have asked repeatedly for their support and recognition, but we have been ignored every step of the way.”

The city council had previously voted last year to approve the same bylaws that were adopted this week. However, a legal technicality prevented them from coming into effect.

The bylaws had been adopted without a commencement date, making them ineffective. Due to legal procedure they could not be amended after the fact, and the process had to start from scratch.

They were put out again for public consultation again earlier this year, and the council received a total of 262 public submissions during this period.

They were first brought before the council in July of this summer, but were put back to the September meeting for debate and a vote.

“Busking is viable on pedestrianized streets with shops because people going shopping come out with change that they may toss into your case if they like you.

There are no shops in Eyre sq or Spanish Arch, no spaces designated for busking in either area, and no plan to designate any before these bye-laws come in.”

Our buskers are constantly dealing with factors such as traffic, shelter, weather, acoustics, and more.”

“Busking is the main source of income for many of us, and now, with these bye-laws making busking even more difficult for us, many of us will simply move to another city, to make our living and bring our art elsewhere.”