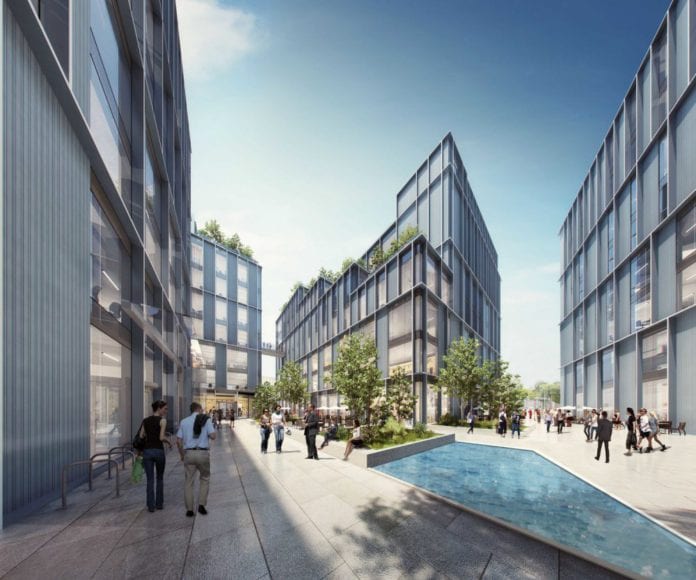 A contract has been awarded for enabling works on the €105 million Bonham Quay office development.

Enabling works are expected to commence very shortly on the mixed use development of four office blocks with two cafés as part of the Bonham Quay inner city redevelopment.

The new office buildings are being constructed on the site of the former Topaz oil storage facility on Dock road, Queen street, and Bóthar na Long.

The project will consist of three eight storey blocks and one seven storey building with roof gardens, and a café/restaurant in Buildings A & C.

Building D will also include a basement level with 138 car parking space and 162 bicycle spaces.

This enabling stage of the project is expected to cost in the region of €44 million, while the full office development represent roughly an investment of €105 million.

The Bonham Quay redevelopment is being led by developer Gerry Barrett with the goal of providing much needed office space in the heart of Galway city.

Main construction work is expected to get underway later in 2019, with the project creating approximately 500 jobs in the construction sector.

Once Bonham Quay is complete is will provide 32,000sqm of Grade A office space, accommodating roughly 3,500 people.

This is one of two major urban redevelopment projects in Galway being led by Gerry Barrett.

He also holds the contract worth €450 million to develop a new urban quarter on an 8.2 acre site next to Ceannt Station, which is expected to contain 400 apartments, a 200 bed hotel, and plenty of retail units.