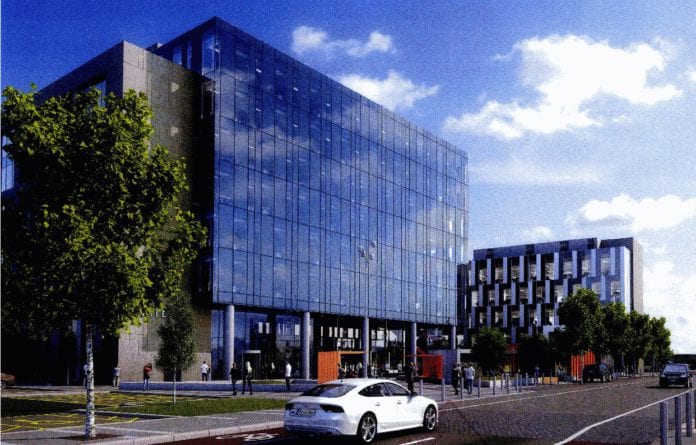 Planning approval has been granted for a large scale office campus in Ballybrit in the first phase of a new business district for the east side of the city.

The office space will be delivered across three blocks. Block 1 is an eight storey building, Block 2 is designed as a six storey building over a basement, and the final office block will be five stories with a basement.

Between the three blocks the development will add 17,433m² of Grade 1 office space in the east of the city.

City planners welcomed the scale of the development, saying “The proposed increase in height and subsequent density is to be welcomed as it would maximise the use of a finite, serviced resource”.

The development was also described as establishing a good pattern of modern development in a low density industrial area.

When completed the applicant says that this development will have the capacity to employ 1,500 people.

Also included in the planning documentation is a single storey café and two ESB substations.

Entrance and exit onto the site will be via Bothar na Mine and the Ballybrit Business Park road for cars.

Parking will be achieved through a surface car park with 421 spaces and further bicycle parking with 120 spaces.

Last December the city council made a request for further information asking the developer to provide more details on the landscaping plan.

McDonagh Capital was also informed that the plans did not comply with fire safety requirements about access for fire brigade vehicles and would have to be altered.

Only one submission was made to the city council about this development. Galway Chamber wrote express its support for the project which it said would “provide much needed Grade 1 office accommodation for businesses in the area as well as attracting foreign direct assessment”.

The city council said that the development should feature “a minimum of two professional pieces of civic artwork/features and shall be sponsored by the developer”.

A further contribution of €493,886 must be made by the developer towards the cost of public services in the area which facilitate the project.

This application is for Phase 1 of the €120 million Eastgate  planned by McDonagh Capital which will consist of offices, public amenity spaces, and a 193 bed hotel.