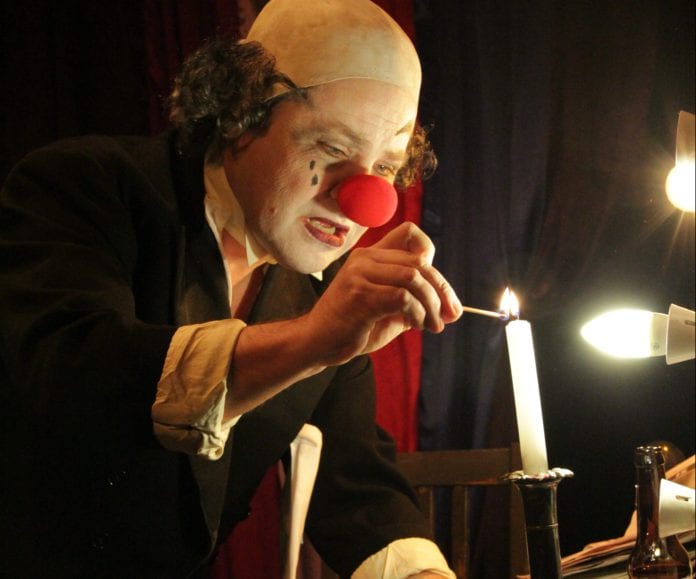 A multi-award winning production of Scaramouche Jones will be performed at Galway’s Town Hall Studio Theatre for one night only on Thursday 21 June at 8.30pm as part of its tour of Ireland.
The play tells the story of a mysterious clown, who on the eve of the twentieth century  emerges from the circus ring for the very last time.
As the final hour of the century ticks away he finally tells the story of his life, from a Trinidadian whorehouse to The Big Top.
White Cobra Production’s interpretation of Justin Butcher’s classic piece of theatre has been wowing audiences in the UK, and has scooped a whole series of awards. Including Best Actor, and being voted Best Play at a national drama festival.
Originally performed in Dublin by the late Pete Postlethwaite, this play has received rave reviews and standing ovations wherever it has been performed around the world.
Director Kate Billingham says “The response we’ve had to this play has been amazing across the UK. For us now to bring our production to Ireland, where in many ways the story was born, having had its world premiere at the Dublin Theatre Festival in October 2001, is an amazing thrill and honour.”
The play brilliantly weaves the actual events of a century which shaped the world we live in today, with the life of an extraordinary character, as for the first time he finds the courage to tell his life story. At times hilarious, at times heartbreaking the show is only on for one night, so roll up roll up, come see the clown and discover the secret life story of Scaramouche Jones.