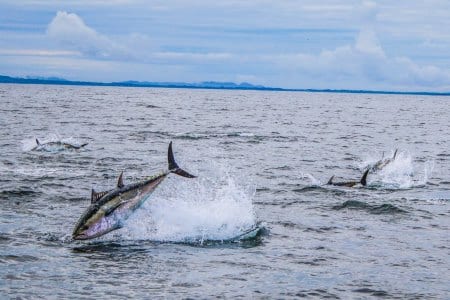 Angling vessels in Galway and all along the Atlantic coast will be taking part in a scheme to gather more data on the much prized Atlantic Bluefin Tuna this Autumn.

The programme will enable 15 authorised vessels in Galway, Cork, Clare, Sligo and Donegal working to catch, tag and release Atlantic Bluefin tuna for data collection purposes off the Irish coast.

This CHART (Catch and Release Tagging) programme is meant to support scientific research by providing more information about the abundance and migratory patterns of Bluefish Tuna in our coastal waters.

The Atlantic Bluefin Tuna is native to the eastern Atlantic Ocean and Mediterranean Sea and is much sought after by anglers for its large size, able to reach over 900kg in weight.

The pilot programme will run from mid-August to mid-October of this year. All of the skippers and crew of the participating vessels have received training and guidance in fish handling, welfare, tagging and data recording.

Sean Canney TD, Minister with responsibility for inland fisheries said that this scheme will “contribute in a very tangible way to important data collection around Bluefin tuna as they migrate past the Irish coastline.”

“The recreational fisheries sector is crucial in the delivery of this pilot programme and we look forward to working with all the state agencies involved and critically with the skippers and their crews who have received authorisations in providing valuable data for scientific purposes.”

Ireland recently came under criticism from the European Union for a lack of control and enforcement of bluefin tuna catches by recreational vessels.

The Marine Institute based in Oranmore has been engaged in international Bluefin tuna migration research since 2015, research that this programme is meant to complement.

Minister for Agriculture, Food and the Marine Michael Creed said that it would allow the Marine Institute and Inland Fisheries Ireland to collect important data in a “tightly controlled environment”.

Anglers wishing to engage in this fishery must only do so on a sea angling vessel specifically authorised to participate in the pilot programme.

A full list of authorised skippers can be found at www.fisheriesireland.ie/bluefin.

The new programme has been developed by the Marine Institute and Inland Fisheries Ireland in partnership with the Sea Fisheries Protection Authority, the Department of Agriculture, Food and the Marine and the Department for Communications, Climate Action and Environment.