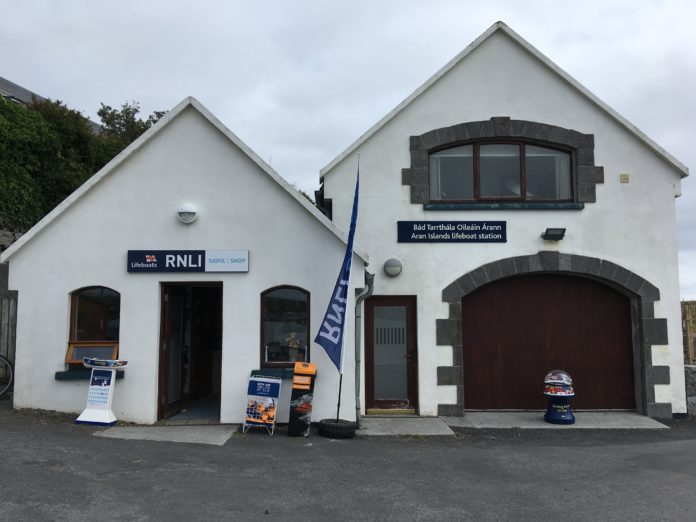 The RNLI is saying Céad Míle Fáilte to visitors to the Aran Islands, with the opening of a new shop on Inis Mór.

The new shop which is located inside Aran Islands RNLI’s lifeboat station at Kilronan Pier, is quickly becoming a key attraction for both the islanders and the many visitors who come each year.

The most westerly shop operated by the charity in Ireland, it helps raise money to support the lifesaving work of the lifeboat station.

The shop launched last Tuesday, and volunteers plan to have it open seven days a week during the tourist season, Easter through to Autumn, with opening times coinciding with the ferry arrival and departure times.

The shop offers a wide range of unique RNLI goods, including clothing and accessories, home and kitchen gadgets, toys and games, books and stationery, and gifts.

All of them are looking forward to a busy summer, after an exceptional first week serving local islanders and visiting tourists.

“We are delighted that Inis Mór is joining the rich heritage of lifeboat station shops in the RNLI. This is the second RNLI shop on the west coast of Ireland, along with Sligo Bay which is celebrating its 20th anniversary this year.”

Brian Wilson said that the response the new shop has gotten from the community and beyond has “exceeded our expectations” for the first week.

“We have had a wonderful response from locals and tourists alike and I want to thank the team here for their efforts in getting us to this point as well as thanking everyone who has visited and shown their support since the opening last week.”

The tradition of the RNLI stores began around a century ago, starting a simple cake stands before expanding to commemorative items, with all profits going back into the charity.

“We are all thrilled that this piece of RNLI heritage has reached Inis Mór and that the proceeds raised can now help to power the lifesaving work of the volunteer crew on the Aran Islands,” Brian Wilson said.