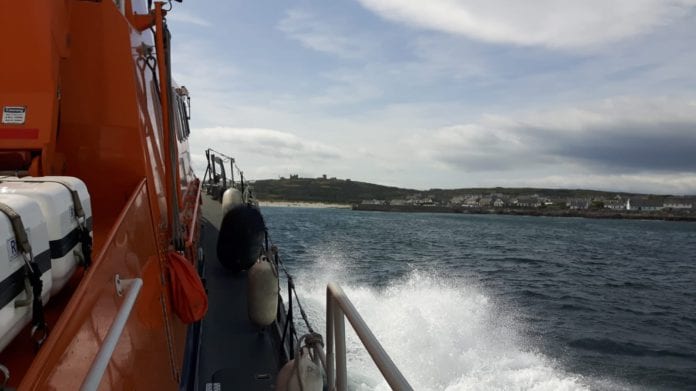 Two medical evacuations from the Aran Islands were carried out within just a few hours of each other by the islands’ volunteer lifeboat crew this week.

On Monday the volunteer crew from the islands’ RNLI station were called to both Inis Oírr and Inis Mór to help two women in need of medical assistance.

The first callout came at 4:49pm on Monday, when the Coast Guard requested that the lifeboat help a woman on Inis Oírr who needed medical help.

The all-weather lifeboat launched with a full crew under coxswain Declan Brannigan in good seas, and brought the woman to Rossaveal Harbour where she was transferred to a waiting ambulance.

Showing that RNLI volunteers are on call both day and night, the Aran Islands crew responded to yet another call that night at 10:25pm.

Again led by Declan Brannigan, the lifeboat went to the aid of a woman on Inis Mór with a suspected broken arm, and brought her to the mainland for medical care.

The RNLI is charity which performs life saving search and rescue operations at sea and on waterways from its 238 lifeboat stations in the UK and Ireland.

Since the RNLI was founded in 1824, its lifeboat crews and lifeguards have saved over 142,700 lives.

Speaking after the call outs, Declan Brannigan said: ‘Our volunteers didn’t hesitate to answer both calls today and we would like to wish both women a speedy recovery.”

“As we approach the summer, we would remind everyone that should they get into difficulty or see someone else in difficulty, to call 999 or 112 and ask for the Coast Guard.”