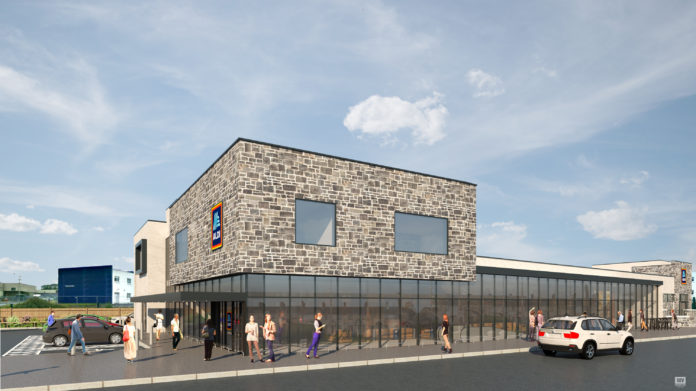 Approval for the construction of an Aldi supermarket on the Monivea Road in Ballybrit has been appealed to An Bord Pleanála.

Tesco Ireland and the Retail Grocery Dairy & Allied Trades Association have both lodged appeals against the city council’s decision to approve the development last month.

Both appellants had made objections to the plans when they were first before the city council.

Aldi plans to build a two-storey supermarket building, with 1,254sqm of retail space, on the Old Monivea Road, which set an opening date of August 2023.

The supermarket will be served by 80 car parking spaces and 12 bicycle spaces, and will also feature four charging stations for electric vehicles. The plans also include provision for a bus stop and pedestrian crossing.

Tesco objected on the grounds that the site is of mixed-zoning, with approximately 60% zoned commercial, and the remainder zoned for industrial usage.

The city council however decided to grant a material contravention of the development plan in order to allow the supermarket plans to go ahead, after Aldi submitted plans saying that the Industrial land would mainly be car parking.

RGDATA said that it was “concerned with the proliferation of planned and permitted convenience stores in suburban locations throughout Galway City in recent years.”

“If not carefully managed, the cumulative effect of these retail developments poses a real threat to the future vitality and viability of the City Centre and existing centres in the city”.

The city council also received submissions in relation to the material contravention, saying that it was not justified due to traffic safety concerns, the overall zoning objective for the site, and that there are other more suitable locations for a supermarket.

Aldi have said that the €9 million supermarket development will create 30 permanent jobs when it opens, and support 50 jobs in the construction industry while being built.

An Bord Pleanála is due to rule on whether to uphold planning permission for the supermarket February 22 of next year.