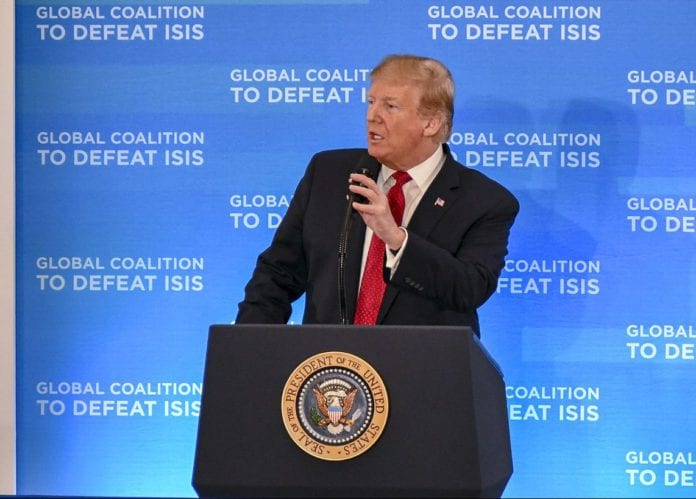 An Anti-Trump protest rally is being held in Eyre Square this evening ahead of the US President’s arrival in Ireland.

Donald Trump will be arriving in Shannon Airport tomorrow after his state visit to Britain and travelling by helicopter to his Trump International Golf Links and Hotel in Doonbeg.

An Taoiseach Leo Varadkar will meet with Trump at Shannon Airport, though the Taoiseach will not be going to the Doonbeg golf course.

This protest rally is being held by a number of local groups including the Galway Alliance Against War, Knocknacarra Palestine Network, Abortion Access Campaign West at 6:30 pm on Tuesday evening in Eyre Square.

The event organisers said that “Many people in Galway feel that they should show Trump what we think of his barbaric attitudes and destructive policies that adversely affect not only the USA but the whole world.”

“We want no part in the Irish government’s complacency and compliance with Trump’s regime. It is important that we act.”

“A demonstration will publicly proclaim that we value peace. We must protect our planet. We want a better world for everyone.”

The guest speaker at the rally will be Tarak Kauff from US Veterans for Peace who is currently on bail in Ireland for protesting to get Trump’s Troops out of Shannon.

The president is currently in Britain on the second day of an official state visit.

Thousands of protesters are expected to take to the streets of London today as Trump meets with Prime Minister May for talks at No. 10 Dowling Street.

The inflatable ‘Trump Baby’ that has featured in several protests in London has been given permission to fly again in Parliament Square for the protests.

The president’s two day stop in Ireland is not an official state visit. Instead he is stopping over on his way to France for the D-Day commemorations taking place this week.