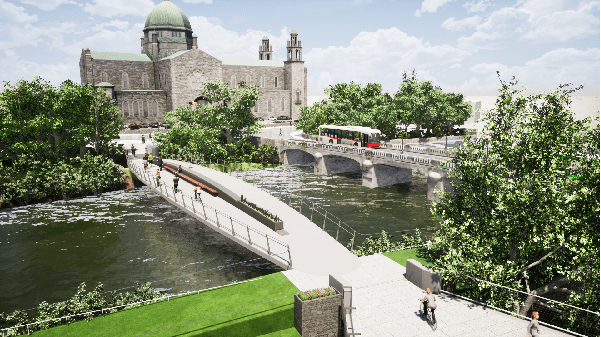 An Bord Pleanála has given its approval for the new Salmon Weir pedestrian bridge over the River Corrib in Galway City.

With the green light from the board, it is hoped that construction work on the 80m bridge will commence early next year.

The bridge from Newtownsmith to Galway Cathedral/Gaol Road will reduce the level of pedestrians and bicycles on the old Salmon Weir Bridge, which was never designed for the amount of traffic using it daily.

Chief Executive of Galway City Council, Brendan McGrath said the board decision is “great news”, that will allow the council to move to the next stage of the process.

“This significant development will tie in closely with other projects such as BusConnects Galway, public realm improvements on Newtownsmith; and the creation of a Civic Plaza at the Cathedral.”

“These will all work together to create safer spaces for pedestrians and cyclists as they move through the city, as well as a more enjoyable public realm for all.”

The three spans will be roughly 10m, 55m and 15m in length respectively, and upgrade works will also be required to the footpaths on either side of the bridge.

With planning approval granted, the next step in the project will be complete the detailed design for tender documentation.

Prior to the COVID-19 pandemic the timeline for the project aimed to start work late last year, and it is now hoped that construction on the elegant new pedestrian bridge will begin in early 2022.

The City Council secured €3.5 million funding for the project from the European Regional Development Fund back in 2019, with matched funding from the National Transport Authority.