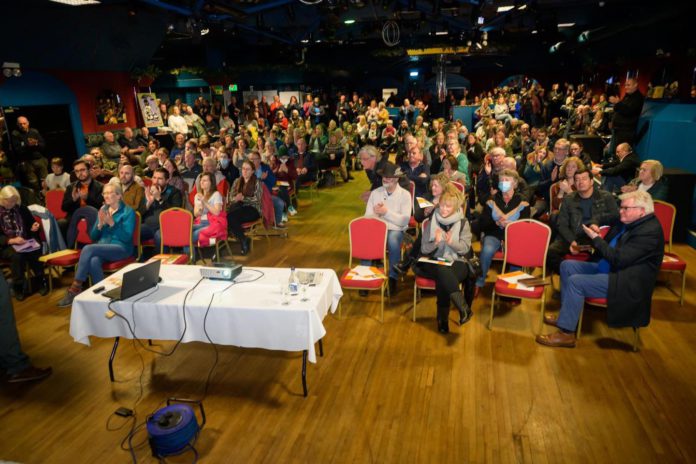 The Gort Bio Gas Concern Group plans to seek a judicial review of An Bord Pleanála’s decision to approve the controversial project on the outskirts of the town.

An Bord Pleanála granted planning permission for the BioGas plant shortly before Christmas, overturning two rejections of the project by Galway County Council.

In both rejections, the council had raised road traffic concerns, as well as concerns about environmental implications.

David Murray, of the Gort Bio Gas Concern Group, said that they were very happy with the county council’s original decision, and not at all pleased with the potential impacts on, “the livelihoods of people, the economic repercussions, the health repercussions, and the environmental repercussions” of the Bord’s decision.

He said that there will be a huge negative economic impact from the BioGas plant interfering with the development of tourism and other amenities in the town.

“We can’t let it go ahead, it will change the future of our small town, which we are basically trying to reimagine.”

He cited projects such as the award winning Gort River Walk, and the Galway-Athlone cycleway, the preferred route for which will go through Gort, and pass by the boundary of the BioGas plant.

“These are very positive projects. We’ve got funding for rural regeneration, we’re reimagining the town.”

“So that’s our future, a really lovely space to live, to work, to visit. This is now being sacrificed by this smelly industrial plant,” he said, which will be located just a few hundred metres from the town centre.

A public meeting was organised by the Gort Bio Gas Concern Group in town on Wednesday evening, where they announced their intention to seek a judicial review.

David Murray said that there was great turnout at the meeting, with approximately 350 people in attendance, where they had only expected in the region of 120 people.

“It was really just to bring home the message that we are going to bring a legal battle to An Bord Pleanála’s decision to overturn Galway County Council’s refusal.”

He added that this is the last step they can take, and that the group is fundraising for a legal team for this challenge.

By the end of the meeting they had roughly €16,000 pledged towards this, he said, and a gofundme set up on Wednesday has already raised over €7,600 as of the time of writing this article.

There was an incident at the meeting where one speaker through two bags of excrement at TDs Anne Rabbitte and Ciaran Cannon before leaving, though he later returned.

This was “very disappointing” David Murray said “because it went against the whole grain of the meeting. This wasn’t a rabble rousing meeting.”

He said that this meeting focused on intelligent and emotive discussion from people who knew about the issues at stake, and what they needed to do about them.

In hindsight, he said that the meeting should have been stopped, and the man asked to be removed along with the Gardaí being called, saying that they had apologised and citing their lack of experience.