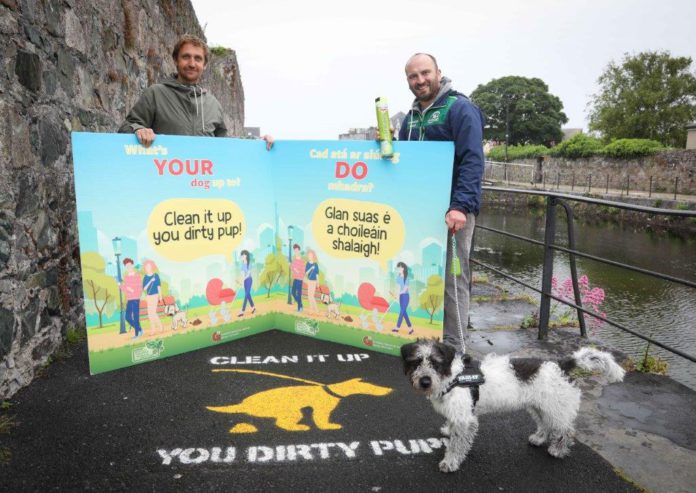 There has been a 60% reduction in dog fouling in five areas trialled in a Galway City Council’s campaign aimed at irresponsible dog owners in the city.

The ‘Clean it up you Dirty Pup’ campaign involved volunteers spraying and counting individual dog foulings on a weekly basis in defined areas, and reporting

One of the areas recorded a 75% reduction in dog fouling in the six weeks since the campaign was launched.

In the process of carrying out the campaign, Galway City Council engaged with various Residents Associations, Tidy Towns, community and business groups to achieve buy-in from the start.

Speaking about the initiative, Tiarnan McCusker, Environmental Awareness Officer with Galway City Council said: “The ‘Clean it up you dirty pup!’ campaign is a highly visible and ‘quirky’ campaign which has gained national prominence in the last few months.

“It has also promoted responsible dog ownership and we look forward to working with more community groups over the coming months.”

Wardens also patrolled the five trial areas and engaged with the public and dog owners.

If a Residents Association, Tidy Towns, community or business groups would like to volunteer or for further information, they are asked to email environment@galwaycity.ie.

Galway City Council staff will meet the volunteers and demonstrate how to safely use the chalk based spray can.

Under the Litter pollution ACT 1997, dog owners are legally obliged to clean up after their pets, if they go to the toilet in public places.

Those who do not clean up after their dog are liable to receive a €150 on the spot fine or Pay €3,000 in court on prosecution for non payment.