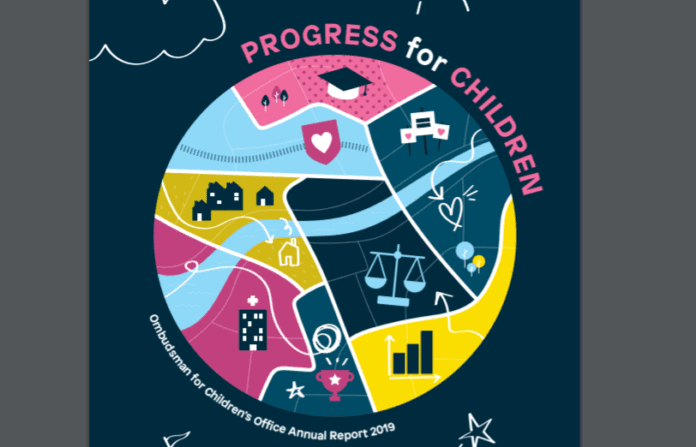 Sixty complaints were made to the Ombudsman for Children’s Office (OCO) in 2019 from the Galway region, the latest annual OCO report has revealed.

This represents 4% of the total number of complaints received by the OCO, while 28% came from Dublin.

Of those complaints, 75% related to schools, 17% to the Department of Education and Skills and 4% were associated with other educational agencies such as the State Examinations Commission.

The OCO’s 2019 Annual Report also revealed that 20% of complaints related to Family Support Care and Protection, a decrease of 4% on 2018.

The proportion of complaints received by the OCO that related to the health services also decreased last year from 16% in 2018 to 14% in 2019.

Complaints received by the Ombudsman for Children’s Office in 2019:

Speaking about the 2019 Annual Report, Ombudsman for Children Dr Niall Muldoon said that the rise in the percentage of complaints relating to education shows that while significant work and development has taken place in this area, there are still many children and families who are unhappy with the way the education system is supporting them.

“In 2019, 5% of the complaints we received were about housing, representing no change on the previous year,” said Dr Niall Muldoon.

“We also launched “No Place Like Home” in 2019 to highlight the feelings and concerns of children living in Family Hubs.”

The Annual Report reveals how the OCO raised the case of Maria with Tusla, a young person with complex needs who complained to the Office about her experiences in an emergency hostel.

Without a proper home, Maria found herself walking the streets day and night with nothing to do. She was also exposed to drink and drug misuse and was sexually exploited during this time.

The OCO was very concerned about the model of care provided to vulnerable young people like Maria.

After engaging with Tusla, it was confirmed to the Office that a 24-hour service would be provided and that a number of residential respite centres to support children living at home or in foster care that require additional supports to maintain their placement had been developed.

Another of the case studies featured in the 2019 Annual Report details how the OCO worked on behalf of the parent of Conor, a teenager with a diagnosis of autism, depression and anxiety, who had been staying in a paediatric ward for nearly five months.

Conor’s parent was concerned about the inappropriate nature of the hospital placement, the delay in the HSE securing an appropriate place for him to stay and a lack of proper supports to help him.

Conor had little exercise, no access to education, limited therapeutic input and his only social interaction was with staff and parental visits.

The OCO met with Conor in hospital and raised these concerns with the HSE, resulting in more proactive planning by the HSE for Conor’s care but it was still nine months after his admission that the HSE secured an individual placement for him supported, by a private care services provider.

Dr Niall Muldoon added: “During 2019 we continued to place the rights and welfare of children to the fore in all our work.

“The second annual Child Talks event took place offering children an opportunity to talk about a right that is particularly important to them.