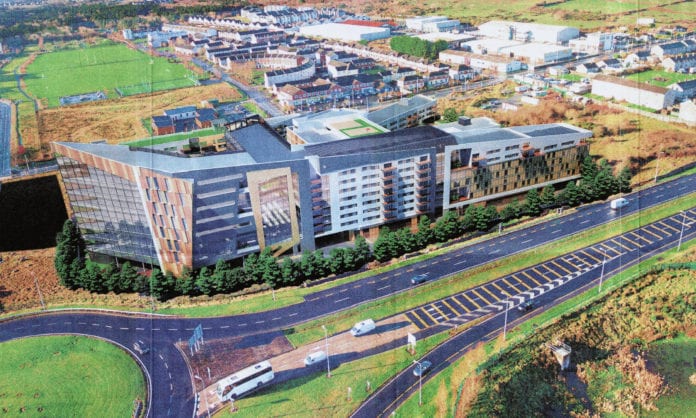 Approval has been given for a massive €130 million residential and commercial development in Doughiska.

Evolution Holdings Ltd have been granted planning permission for a mixed use development of six blocks of buildings ranging from three to seven storeys tall at Sraith Fhada in Doughiska.

The development 130 ‘build-to-rent’ apartments, a hotel with 122 guest bedrooms and 12 apartment suites, and a 12,000m² office block with a café/bistro on the the ground floor.

Blocks A, B, C, and F would form the residential component of the development, with 57 apartment in Block A, 33 apartments in Block B, and 20 apartments each in Blocks C and F.

Other amenities in the design include a creche and a six storey car park building with 351 parking spaces as well as basketball and handball courts and an exercise area at the roof level.

An additional 231 surface level car parking spaces and 155 cycle spaces will be spread through the rest of the site.

In April the city council requested further information from the Evolution about the proposed impact that this development will have on traffic in the area.

In response a Traffic and Transport Assessment and Road Safety Audit were submitted the city council’s Transport department.

The €130 million project is expected to create roughly 250 jobs in construction while under development.

When it is completed the development is expected to accommodate over 1,000 jobs between the office space, hotel, and other amenities.

The city council granted planing permission with a total of 40 conditions attached.

Before work begins on the project the developer is required to make a contribution of €1,724,510 to Galway city council, and lodge a further €325,000 to secure the provision of infrastructure such as roads, footpaths, and public lighting.

A suitably qualified archaeologist must also be hired to carry out archaeological testing on the site, with no surface work to commence before they have submitted their report to the Department of Culture, Heritage and the Gaeltacht.

There is one recorded archaeological monument on the site, an old roadway known as the Hags Road, which the developer plans to include a 15m buffer zone around.

A mobility management plan must also be in place within three months of the buildings becoming occupied, with an annual report to be submitted to the city council.

In addition to the café/bistro included in the design, the city council instructed the developer to add a convenience store to the site plans.

Planning documents submitted by the developer claim that this project has the “create and catalyse economic growth, enterprise development and job creation.”

They noted that “the proposed office component, as an integral part of a considerable high quality, mixed use scheme, is a proactive effort to address the existing and future demand for high quality office spaces in the city.”