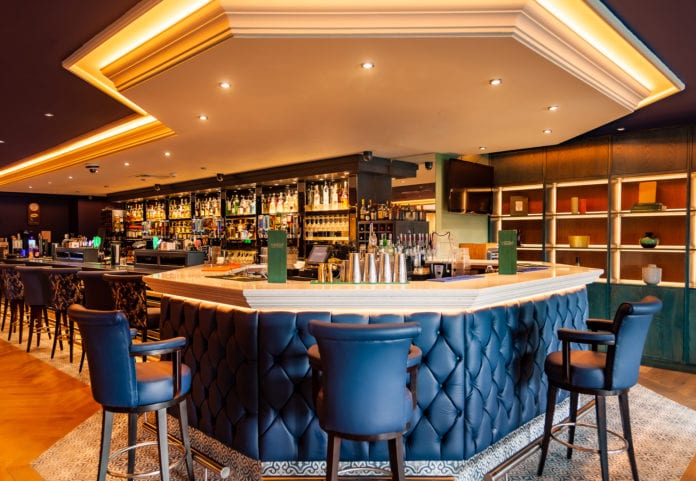 A new you for a new year is an old adage, and the reason some sayings get so old is because they hold true. The Connacht Hotel certainly thinks the idea has merit, with a refurbished look launched for 2020 which brings new colour, light, and style to the entire ground floor lobby, bar, and restaurant.

With an eclectic, quirky design that incorporates bespoke artwork, lush greenery, and a modern elegance into a wide range of wonderful social and dining spaces, the Connacht Hotel is putting it’s best face forward to welcome tourists and locals alike.

The refurbishments, which were carried out in early January, have completely overhauled the hotel’s Bar Solo and Reuben’s restaurant, and adds plenty of nooks and crannies where people can sit and enjoy a coffee from the new Barista Bar in the lobby.

Laurence Toal, Deputy General Manager of the Connacht Hotel, said that this facelift is something the owners have been considering for several years, but that now was just the right moment to put the investment in.

And it’s easy to see why they thought as much. The Connacht is in the middle of a very important stage in its life. Throughout all of last year the hotel was celebrating its 50th anniversary. And as for the year ahead, the European Capital of Culture award has seen half the world’s travel guides place Galway on their “must visit” lists for 2020.

“You could see it as the closure of that 50 years and the beginning of the new 50 years, it was just the ideal time to move forwards,” Laurence says.

The expectations guests have of a hotel have evolved over time. As popular as the hotel and bar remain, especially with their new facelift, people also like a less formal space where they can relax or meet with friends, maybe grabbing a drink and a light snack.

The lobby now features an enclosed library space that incorporates clever design features and stylish furnishings. Playful and not too formal to allow you mix work and leisure in a relaxed environment.

One of the most innovative additions is the new Barista Bar placed in the hotel lobby, which adds an entire new dimension to the area. Hotel lobbies can be cold and daunting places, but now, before arriving guests even reach the check in desk, they can grab a coffee and a snack from the friendly staff.

Food in hand, there are an ample supply of comfortable spots to settle down in, complete with plenty of plug and USB sockets that make it a perfect place for people to meet and work.

“There’s a huge buzz around the lobby and conservatory which there never was before,” Laurence says, “Because it was just an area where people came to check in, but now it’s the centre of attention”.

The Bar Solo has been redesigned to maximise the use of its space and provide a stylish design. Its new appearance calls back to the hotel’s history with a hint of old school elegance, but still with a very modern vibe.

If the buzz of the bar gets a little too much, just step through the floor to ceiling panelled french doors into the botanical inspired oasis that the front conservatory corridor has become.

Filled with light and lush greenery, this area shows a face to the world that blurs the line between indoor and outdoor space. Filled with elegant furnishings that catch the sun on one side and keep the plants on the other, it calls to mind nothing so much as greenhouse. One might almost look up and expect to see and hear parakeets making their home in its heights.

Rueben’s Restaurant has also got a fresh new look, using bold colours to define spaces and stylish feature-wall partition, letting guests have the option of private dining and group lunches.

“We’re a huge operation here,” Laurence says, explaining the need to squeeze the most out of their space, “We have 350 bedrooms and we have the 24 hour Active Fitness.”

The Connacht Hotel has indeed expanded repeatedly down the years since first opening in 1969, adding more rooms until now there can be as many as 1,000 guests at the hotel on any given night.

“And it all ties together through the food and beverage department. It is the hub in many ways, the meeting place, everybody passes through here.”

The Connacht Hotel meeting rooms have also been treated to a makeover with a fresh new look and an additional breakout and registration area added after feedback from clients.

The entire renovation was carried out in early January, after the busy Christmas and New Year’s period Laurence explains, but before tourist season picks up again once the holiday hangover clears.

A remarkable amount of work was done ahead of time and behind the scenes, and carried out with enough military precision that the entire project only involved a ten day closure.

There’s still a few tweaks to be made before they’ll declare themselves completely satisfied with the finished product, Laurence tells me, so it’s expected that the new look will continue to evolve in the weeks and months to come.

But feedback from guests has been overwhelmingly positive so far he says, and it’s not just tourists that are taking notice.

No-one passing by can fail to notice the bold new face the Connacht is showing to the world, and more than just tourist traffic is having their curiosity peaked by the recent facelift.

They bar and restaurant already attract a big local trade, Laurence tells me, “Especially on the weekends we have a lot of regulars that come in for food and drink”, but that obviously they hope to grow that trade.

“They’re enjoying it, they’re looking at the menu and they’re maybe thinking we could come here for a business meeting or we’ll come here for a night out, or with our family for a special occasion.”

The Connacht Hotel is one of the only big combined drinks and dining options on this side of the city Laurence points out, a big market to be tapped.

“What they see and what they get is what’s going to make them return, and tell their friends.”

The only thing that isn’t changing at the hotel is their friendly, welcoming staff, some of whom have been making guests at home at the Connacht for over 40 years.

This personal touch, beyond all the fittings and fixtures, is what keeps guests coming back year after year. But having a bright and modern face to show the world certainly helps.