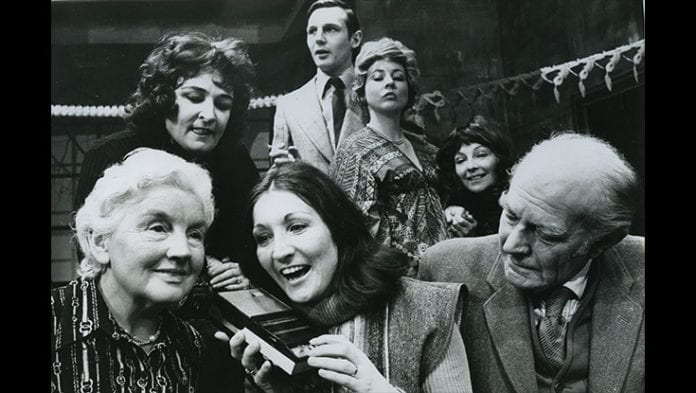 A new online exhibition at NUI Galway opens up the archives of the Lyric Theatre to look at the history of one of Ireland’s most ambitious centres of the arts.

Originally founded in 1951 as the Lyric Players Theatre, this years marks the 50th anniversary of the opening of the new theatre in Belfast that still welcomes people to this day.

Mary O’Malley started something in her own home, meant for friends and family, that eventually grew to become one of the most important theatres in Northern Ireland and internationally.

Staying open even during the darkest years of the Troubles, the Lyric Theatre bridged a cultural gap during a very divided time.

As it grew the Lyric expanded its ambitions beyond stage productions to include an art gallery, an academy of music and drama, and a craft shop.

It even published its own internationally respected literary journal Threshold that was known for carrying the works of Mary Beckett, Seamus Heaney, Brian Friel, John Hewitt, John Montague, and others.

NUI Galway’s Archivist Dr Barry Houlihan said this exhibition shows “a record of artistic ambition, success and many challenges through the decades.”

“The digital archive material showcases to the world not just the vision of its founder, Mary O’Malley, but also her craft and vision as a director and producer, and also how the Lyric Theatre earns its place within a proud and rich theatre heritage internationally.”

The Lyric brought to life important works chronicling the life as it was in the North at the time like Over the Bridge by Sam Thompson and The Flats by John Boyd.

Along the way it nurtured some of Ireland’s finest talent with actors like Ciaran Hinds getting their start at the Lyric Theatre.

And if you take another look at the picture up top you’ll see a young Liam Neeson starring in The Gathering by Edna O’Brien in 1977.

But it wasn’t just limited to working with Irish artists, bringing important international works by the likes of Anton Chekhov, August Strindberg, and Henrik Ibsen, to Belfast audiences for the first time.

For some time now, all of this history has been stored at NUI Galway, gathered up in 80 boxes of records.

There’s extensive correspondence between some of Ireland’s most important literary figures, behind the scenes photos of productions, annotated scripts, company records as well as posters, programmes and other promotional materials from the ages.

Curated by Dr Houlihan and Betty Attwood, this digital exhibition opens up the history of the Lyric Theatre in a way not seen before with hundreds of previously unpublished documents.

Professor Lionel Pilkington from NUI Galway said the archive is “powerful resource” for anyone interested in Northern Ireland’s cultural history from the 50s to the late 80s.

“This is an archive that tells the story of a vibrant, and frequently overlooked, all-Ireland cultural initiative operating with verve and enthusiasm within the context of an often suspicious and sometimes hostile political state,” he concluded.

Anyone who wants to view the exhibition online can do so here.