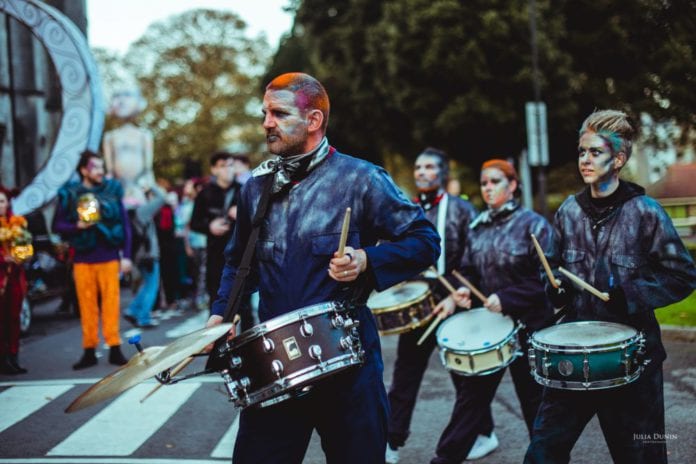 Macnas is bringing its touch of mad creativity to the St Patrick’s Day parade in Galway with a magical show from its young performers.

The Macnas Drummers are pioneering new high tempo beats, performing a celebration of the dance between shadow and light on the city streets this St Patrick’s Day under the stewardship of Éimhín Cradock and Debbie Wright.

They will be joined by the Macnas Youth Ensemble led by Miquel Barcelo, who will bring a performance inspired by the animal energy in flight and fight with the human spirit.

Of course it wouldn’t be a Macnas show without dazzling aesthetics, something costume designer Cherie White and makeup artist Michelle Ruane bring to the table in spades.

Passionate about nurturing the next generation of Spectacle artist in Galway city and county, the Macnas Young Ensemble has 45 members and the workshops are free of charge and run throughout the entire year with the support of the Connacht Hospitality Group.

This support has helped young people take part in free, high quality cultural performances and artistic activities since the Youth Ensemble was founded in 2009.

Under the tutelage of Macnas Performance Director Miquel Barcelo and other visiting facilitators, the group develop new work that is relevant to them and which feeds into the present and future of Macnas.

The St Patrick’s Day Parade kicks off at 11.30am at NUI Galway and will make its way to Bothar na mBan by 1pm.