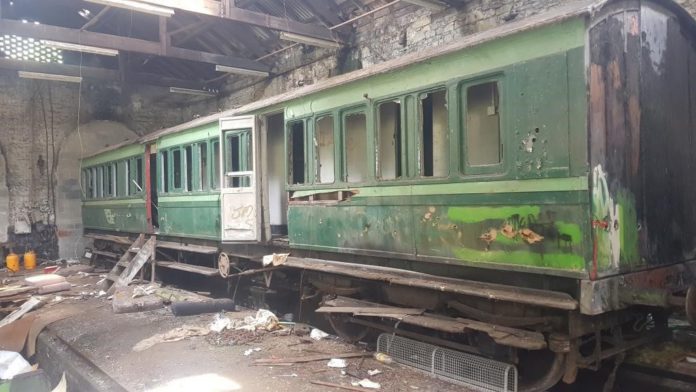 The restoration of the old Maam Cross railway station acquired a stunning piece of history today, with the arrival of a vintage railway carriage more than a century old.

The Connemara Railway Project is restoring the former Maam Cross Railway Station, as well as a stretch of tracks along the old Galway-Clifden railway route.

While work to date has focused on the station itself, a brilliant addition to the project arrived today in the form of a railway carriage dating back to the very early 20th century, and still in wonderful condition.

Jim Deegan, a director of the Connemara Railway Project, told Galway Daily that the carriage had been sitting in storage for decades.

“It was built in 1903 for the Great Southern & Western Railway, and miraculously it got preserved when most of these got taken out of service in the 1960’s.”

“It’s been in the shed in Mullingar for the past 50 years so it hasn’t been exposed to the elements, or at least the external elements, and we have acquired it from the Railway Preservation Society of Ireland.”

“It’s a huge restoration job, so it will take quite a lot of money and time. But it’s structurally sound, and it has the potential to be fully restored.”

Though they hope to put it back on the tracks this year, as the carriage was arriving today it was brought by truck, passing through Oughterard around lunchtime before arriving at Maam Cross.

This is the first piece of rolling passenger stock to come to the Connemara Railway Project, which has thus far focused on restoring the old station’s buildings, and the section of railway track that comes with the land.

While there are other similar carriages which have been restored to their old glory, this will be first of its kind to restored on a stretch of railway line in the Republic, Jim said.

The plan is for the restoration of the old carriage to go hand in hand with laying down tracks on the old Clifden-Galway route in the area around the station, and creating a visitor attraction from it.

“What we are doing here is restoring a section of the old Galway-Clifden railway line here at Maam Cross,” Jim Deegan said.

“We’ve acquired the former Maam Cross station, and we’re restoring it and laying tracks, and we will have a stretch of the Connemara railway which we will run trains on as an all weather family attraction.”

This, he said, will give people the opportunity to experience a piece of Irish railway heritage from another era.

This is a massive undertaking by a non-profit organisation, with volunteers arriving to help out from far beyond just Galway Jim states.

“We have a very enthusiastic band of volunteers who come most weekends to work on the line. We’ve got people coming from Cork, from Tipperary, from Mayo and Sligo, and from Dublin.”

While the laying down of tracks along the old Galway-Clifden line is still underway, visitors to the Maam Crioss station may not have to wait until its done to ride the rails.

The hope is that by late Autumn, visitors to Maam Cross will get to enjoy the railway experience on a pop-up tack that’s been put down temporarily.

Donations to this historic restoration project can be made at its GoFundMe page.