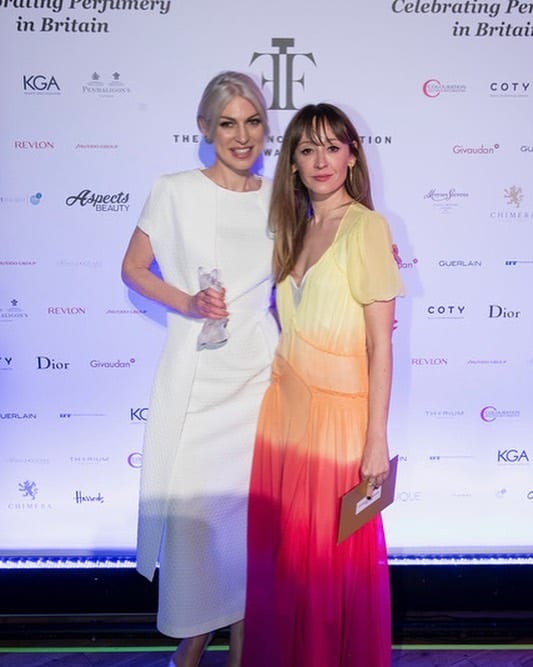 Galway’s Cloon Keen Atelier have become the first Irish company ever to win at the prestigious Fragrance Foundation Awards.

The Fragrance Foundation Awards recognise the best of the best in every aspect of the perfume arena from marketing and packaging, to fragrances for men and women and the best new fragrance.

The company was founded by two filmmakers, Margaret Mangan and Julian Checkley, who decided 20 years ago to ditch their past careers and start creating scents.

Margaret, the company’s Director, said that it means a huge deal for them to have won this award.

“We’ve been at this for 20 years now and for a company our size, a Galway company, to be recognised like this is incredible”.

She said that a focus of their work and their brand is telling Irish stories that resonate with people, and working with a perfumer of Meabh’s calibre on this was an incredible experience.

The 2019 Fragrance Foundation Awards took place in the Brewery in London over the weekend with over 500 representatives from the biggest names in the perfume industry.

This win is a big moment for Cloon Keen Atelier after being nominated for five years running without quite making it over the finish line.

After coming so close on so many occasions Margaret added that it was a shock when their name was called on the night, and up until that moment “the only thing I was worried about was how they were going to pronounce Róisín Dubh”.

Róisín Dubh was created by Meabh McCurtin as a scent that celebrates Irish diaspora, “Historically they’ve been such an important part of Irish literary and artistic culture, and from that also came the idea of Ireland as a muse,” she said.

“Róisín Dubh, the little black rose, is a character in an ancient Irish song, but she is also an analogy for Ireland itself.”

Looking for a way to explore that story and sense of identity she focused on the history of so many Irish writers who gathered at the The Grand Hotel Corneille in Paris’s Latin Quarter.

“My mother is an English teacher and our house is full of books by Irish writers,” Meabh said, adding “Growing up I was always hearing about these characters and I loved the idea of them, Joyce, Beckett, Synge, going abroad and creating this community.”

“We were looking for something that would capture the sensuality in their writing, so I used a special quality of rose called Rose Essential as the heart of the fragrance.”

“Then I built in a suede and ink accord, which, together with the rose, forms the main axis of the fragrance. The suede-ink accord is a nod to the fact they were writers, and it balances the rose, which is feminine, sensual and poetic, adding a drier and more masculine note.”

“Then I explored their bohemian lifestyle: it sounds like they had a whole lot of fun! They were living outside the normal codes of conservative society, so we put some patchouli and olibanum, trying to capture that libertine feeling.”

The end result is a unisex fragrance that is modern, but also captures a sense of the past.

Margaret said that holding the award itself after their work was “such an incredible feeling” as were the calls from all their friends and family congratulating them in the aftermath.