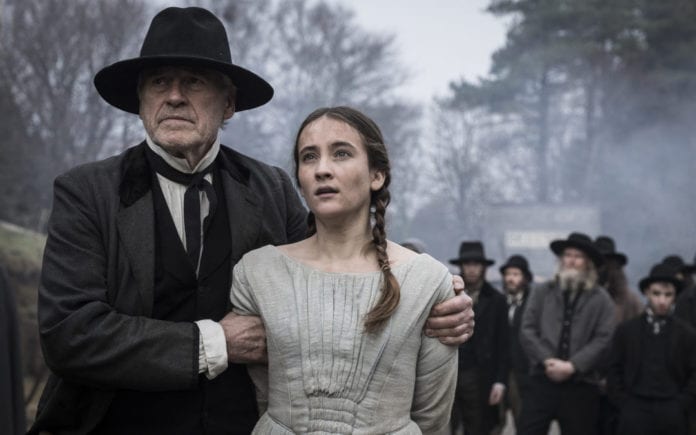 Galway Film Fleadh has revealed the first titles coming to their screens this summer at the 31st annual film festival.

Closing out this year’s film fleadh will be the international premiere of Never Grow Old, a terrific old-fashioned western, starring Emile Hirsch and John Cusack.

This fast paced action movie set in California during the 1849 gold rush, where anything can happen and loyalties spin like the barrel of a gun, was shot right here in Connemara.

It also marks director Ivan Kavanagh’s return to the Fleadh since his 2014 film The Canal.

Director Patrick Wang makes a welcome return to the Fleadh following the success of previous features In the Family and The Grief of Others.

This two parter follows the story of Dorothea and Greta, who 40 years ago transformed an abandoned bread factory in the sleepy town of Checkford into a vibrant arts space.

It quickly became the heart of their local community, showcasing theatre, dance, music and film.

But this community led project is threatened when a big business celebrity couple with questionable motivations move into town and construct an enormous competitive arts venue, sucking up funding and audiences overnight.

Extra Ordinary will bring the laughs with the story of a driving instructor who must use her supernatural gifts to save a lonely man’s daughter from an aging rock star hoping to use her for satanic sacrifice.

The Irish Film Institute returns to the Fleadh with Glimpses of Galway, a wonderful new programme of archival films made in and about Galway.

These snapshots capture life in Galway from the silent movie era in the 1920’s, right through to the 1970’s.

The programme includes compelling and rarely-seen amateur and professional footage of Galway city and county, accompanied by live music and introduced by the IFI’s Sunniva O’Flynn.

Galway’s own Steve Wall is starring in the modern noir My Foolish Life as jazz legend Chet Baker.

Speaking about the selection of films, Galway Film Fleadh CEO Miriam Allen said, “We are delighted to announce these films that we hope will whet the appetite of our audiences for the variety of cinema screening at Galway in July.”

This year the Fleadh will also feature Varda par Agnes, the final work from French New Wave pioneer Agnès Varda who passed away earlier this year.

As part of a tribute to the legendary filmmaker the Fleadh will be screening some of her most classic works, L’une chante l’autre pas, Cléo de 5 à 7, Vagabond, The Gleaners & I , and La Pointe Courte, ahead of her final film.

Galway Film Fleadh will take place from July 9 – 14 with a wide range of films from Irish and international filmmakers with everything from full length feature dramas and compelling documentaries to short films shot by up and comers.

The world renowned film festival will also feature a film marketplace, workshops and masterclasses, and a pitching competition.

William Fitzgerald, who creates the film programme for Galway Film Fleadh said they were pleased to be able to “peel back the curtain a little bit and give people a chance to jump on these early release titles”

“They represent a good taste of what’s in store – comedy, classics, Irish talent blowing up the big screen and the final film from the inestimable Agnès Varda.”

Tickets for these early announcements and all the films coming this summer can be booked online here.