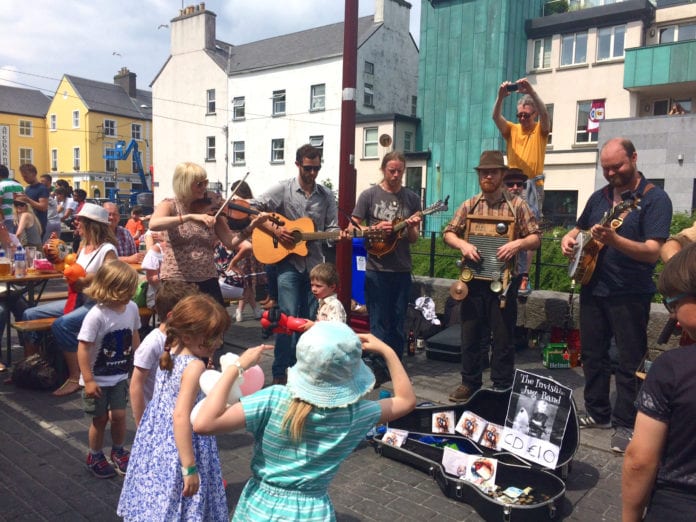 Anyone walking around town yesterday might have run into the crowds at the Street Feast, Galway’s newest food festival in the West End.

More than 20 West End shops and restaurants participated in the successful event, which went on for five days.

There were pop-up restaurants every day starting on Thursday all the way through to the June bank holiday Monday – which saw as many as 15 traders for a full day of music, food, and dancing.

“It was such a success last year we did it again,” commented organiser Lisa Regan from the West End Traders Association. “It’s amazing. We’re really blessed with the weather.

“The West End is Galway’s oldest neighbourhood, and the majority of the businesses down here are owner-occupied, so when you go into the business you’re meeting the person that owns that business. And that’s not as frequent in modern day trading – you know, looking at high street chains and all of that. So all of the businesses are very unique to Galway. You’re not going to get any of the things that are here today in any other place.

“We just wanted to showcase that, and show everyone all the amazing places there are to eat and drink and hang out down here. Because it’s only about two minutes from Shop Street…and Galway’s a small place. So we just wanted to encourage as many people as possible to come here and see everything that we have on offer.”

Regan – who owns her own PR firm and lives on Henry Street – added that the festival is completely eco-friendly.

She explained: “We are only using bio-degradable packaging and composting. And all of our refuse is being collected by Walsh Waste, so none of it is going to landfill. We took a real stand on that – you could only be part of the festival if you were compliant with that.”

Feastgoers were also enthusiastic about the festival.

Galwegians Dave Gleeson and Gemma Forde brought their kids to the event.

They compared it to London’s Borough Market, saying that the food and the atmosphere were both “excellent”.

“We’re all a little hungover, so it was the best sandwich we’ve ever had,” admitted her friend Mary Beth Burry, also from Canada.

Turlough Mulligan, a chef at Creole on Dominick Street, seemed pleased with the praise.

“Great, thanks!” he laughed. Creole supervisor Lizzie Quinn was also happy with the day.

She commented: “It’s been going really well! Busy. We’re out of burgers already, and we’re almost out of pulled pork. And we’ve just got some more chicken back on the go. We’ve run out of salad five times. And it’s actually really good fun. It’s nice to be outside!”

Quinn went on to describe the development of the West End as a major food hub in the city: “It’s gotten so much busier in the West End in the last five years – because the community are really trying to push this area. There’s loads of new restaurants popping up all over the place, so it’s great.”

It seems everyone was happy with the West End Street Feast again this year.

And Regan said they’d like to do something similar on a more regular basis as well.

“Ideally we’d love [Raven’s Terrace] to be designated for things like this. Because…we’re not disrupting any traffic, it’s not putting anybody out. It’s actually just a really lovely thing. It’s lovely for people just to be able to walk around. And it’s been really nice for families I think as well. Because it’s really child friendly.

“It’s just a lovely, lovely day. So we will definitely be doing it again. And we obviously hope to improve every year, because we’re always learning.”