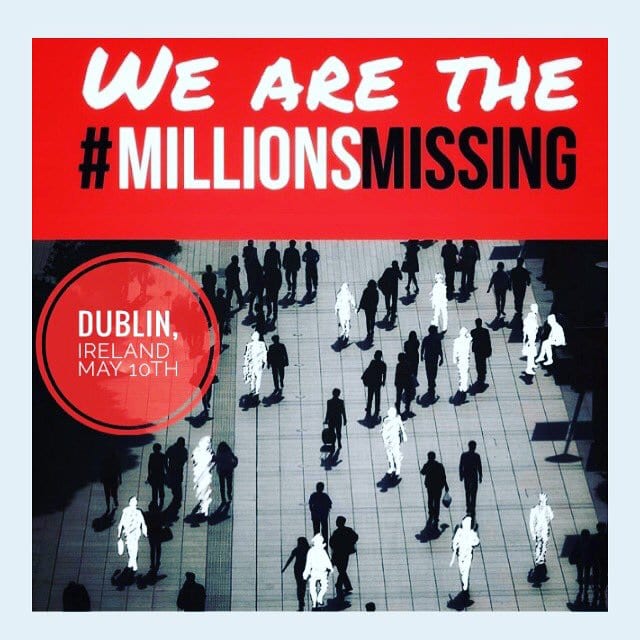 M.E affects people in every town in Ireland, but you might not even know they’re there.

The biggest problem in dealing with hidden illnesses is that they’re just that, hidden. Conditions like cancer, AIDS and others that so visibly destroy lives are easy to empathise with, and rally around.

But conditions that don’t show on the surface can be harder. Myalgic Enchephalomyelitis, M.E, is estimated to affect roughly 12,000 people in Ireland.

But before my own mother was diagnosed with M.E a few years back I’d never even heard of it, and a lot of people still haven’t.

Even the people that do know of it mightn’t be aware of how serious it is, or how many people it affects.

M.E can cause a wide range of symptoms that are also found in other conditions like joint and muscle pains, short-term memory loss and an inability to concentrate.

But the most commonly known effect is deep and abiding exhaustion that gets no better how much you rest.

Exhaustion is what M.E is most known for, and even how it’s often named. Chronic Fatigue Syndrome.

It’s a name that lends itself to jokes and derisive comments, “I’m always knackered after work as well, maybe I should see a doctor” or “Sure they’ll call anything a condition these days.”

I know I told more than a few jokes myself when I was told of my mother’s condition. But then she is still able to do most of the things she loves in life.

To work, albeit tutoring from home, and to travel. For others M.E is far harsher in limiting their options in life.

Suzanne Young meets me at the door of her house in Crestwood at 11 in the morning with her dog hovering around her legs.

She asks me if I mind if she gets back into bed, where she has to spend most of her time in the years since she’s been diagnosed with M.E.

Back before 2008 she was a dance instructor studying for her Masters Degree. She remembers back when she was dancing that at the end of a lesson she would often find herself completely blown, but just chalked that up to having a very physical lifestyle.

But then she went to a doctor in 2008 who told her that much of her past medical history could could be traced back to a single cause.

“I’d had tummy troubles so I’m up at the hospital and the chap I was seeing asked if he could call the rheumatologist because he said he thought I had something called Fibromyalgia.

“And the rheumatologist came down and he said, ‘Suzy, not only do I think you have fibromyalgia I think you have something called chronic fatigue.’ And he went over my medical history and said ‘and I think this is something you’ve had for years.'”

That was a real eureka moment for her, according to Suzy. As he listed off the symptoms of M.E and she connected them with all the health problems she’d had through life.

But that just goes to show what a hit and miss process there is for catching M.E. Suzy’s doctor was certain she had been afflicted for years before being diagnosed.

It comes down to how aware doctors are of M.E and how willing they are to diagnose it. A more complicated issue than it sounds since what causes M.E or how to properly treat it are still mysteries.

Orla Ní Chomhraí, Secretary of the Irish ME/CFS Association and coordinator of the Galway branch, had her condition diagnosed some 20 years ago.

“I’d had a few infections, but I just felt that I wasn’t really recovering so I went to the doctor.” But it took more than a single trip to the doctor to find out what her problem was.

“I didn’t find the doctor at the time very good. I felt I wasn’t taken seriously.” she says. Fortunately she was able to get a second opinion and after a few blood tests to rule things out the doctor was able to tell her what the issue was.

While catching a condition in its early stages, even a chronic one, usually leaves you hopeful for maintaining a better quality of life; without any real treatment options M.E has still had a massive effect on Orla’s life.

When she was diagnosed Orla thought she’s recover within a year or two, but twenty years later she needs a mobility scooter to get around most of the time.

Having lived with M.E for nearly half her life, it hasn’t just taken away prized experiences from Orla, it’s prevented her from having them in the first place.

“I haven’t been able to work other than voluntary work on M.E.” she says, “Even relationships, I’ve had one or two relationships since then but nothing near, like, living with somebody or something like that. And I might never have a relationship like that.”

“It’s taken my life”, is Suzy’s straightforward answer to the same question of how M.E has impacted her. She had plans to retire from dance instructions as she approached her 50th birthday, and use her Masters to do some tutoring.

But she can’t maintain the energy or the constant focus need to work as a tutor.

Despite the catastrophic damage that M.E can have on someone’s life, both Suzy and Orla think that it still flies under most people’s radar of health issues to look out for.

That’s why the M.E Association tries to push public awareness all through the month of May, and on May 12 in particular.

May 12 is the International Awareness Day for M.E and CFS, when support groups around the world try to educate people about this oft neglected condition, and speak up for the people who aren’t there to speak for themselves.

One event that does this is the Millions Missing march. In cities and towns around the world campaigners leave empty shoes outside parliament buildings, town halls, anywhere that can draw the eye, to highlight the number of people cut out of society by M.E.

All to highlight how much larger in scale a problem M.E is than people know. Suzanne speaks of the campaign with enthusiasm because she doesn’t think people know that there are millions around the world living like her.

And how could they, when you don’t see them.

“There’s our shoes, where are we? We’re not there. Can you see me now? And whoever started that has done fantastic because it’s gone around the world.”

Even with the premise of just sending shoes because people are too ill to attend any kind of gathering in person, there’s an element that would be funny if it weren’t a tragic indicator of how bad things can get.

Suzanne says that a lot of people can’t even send shoes off to campaign organisers because they’re stuck in the house.

“If you’re too ill and you can’t even get somebody to go to the post office and post an old pair of shoes; what you do is you take a picture of them and those that are going say, ‘look, send me the picture of them and put a little thing on the bottom.’

“I just put ‘dance teacher, life gone, eight years in bed'” she shrugs, “it is what it is.”

The Millions Missing march outside Dáil Eireann this week marked the 25th anniversary of the International M.E Awareness day. But it wasn’t the only event to mark the occasion.

Knowing that so many people might have wished to go, but physically couldn’t, the Galway branch of the M.E Association held a special screening of the documentary Unrest in the Connact hotel, which tells the stories of several families around the world going through the journey of living with M.E.

But scheduled events like that happen less frequently with the local support branches of the M.E Association than might be common with other groups.

Orla admits somewhat wearily that her own participation in the Galway support group has dwindled over time, and that she isn’t the only one.

“We used to meet more frequently but I just haven’t been up to it lately.”

The problem with trying to organise a community support group for M.E, as she sees it, is that there has to be someone in charge who can commit being in place, “come hell or high water.”

But, “In my own life I never know what day I’ll be well enough to go out.” she tells me, “I probably leave the house once or twice a week.”

The internet has been an amazing tool for keeping in touch with other people in place of being able to meet in person.

Suzy perks up when she talks about how, in better moments, people can poke fun at the things they do out of exhaustion on a private facebook group The Lighter Side.

“We don’t talk about any illness, just daft things like, ‘searched all morning for my cup of tea. Where was it, in the fridge.’ Things like that or, ‘I’m trying to boil an egg and I’ve just put in the kettle.’

“Daft things we say to each other. So that’s a bit of relief.” But sometimes Suzy can find it difficult to even hold her phone or read she’s so exhausted.

Even with the internet’s power to connect people, there are moments when Suzy’s painfully reminded of how far removed you still are from other people.

When she sees messages from people who’ve reached their breaking point, and the panicked outpouring of support that follows. Hoping they won’t do something irreversible.

Even over the phone, the frustration in Orla’s voice is plain when she talks about medical research into M.E, or the lack of.

It’s not that there’s none, she’s a pains to point out. And things have picked up in the past few years. But Ireland doesn’t put nearly as much funding into researching M.E as other countries.

“It’s a bit of a vicious circle.” she admits, “Because there’s not much research it’s hard to get funding in the first place, and there’s talk among the research community that maybe because there’s not enough money going into it, it might not be a good career move in the long run.”

The Irish ME/CFS Association has given €70,000 to two different research groups, but private donations can never replace government funding for something as time and cost intensive as medical research.

According to Orla things are improving, Several million in funding has been earmarked for the next few years. So at last what there is, is guaranteed.

But it’s a drop in the bucket compared to what goes towards other conditions that have long attracted more public attention.