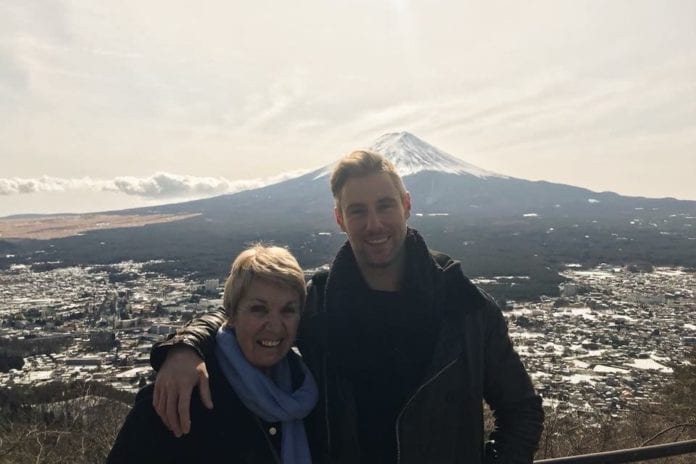 A Galway woman with Parkinson’s Disease will climb the highest mountain in Japan, all for a worthy cause.

Maura Ward, originally from Inis Mór, will take on the enormous challenge of climbing Mount Fuji for Cure Parkinson’s Trust.

Maura ran a pub in Inis Mór in the 1980s and moved to Co. Antrim after splitting up from her husband.

Her son and daughter were born on the island.

After going travelling with her son Johnny in her 60s, an Irish travel blogger with a passion for backpacking, she herself fell in love with budget backpacking.

In 2012, Johnny noticed a tumor in her left leg, which he hoped was just a trapped nerve.

However, it didn’t go away and 2013, after a visit to a neurologist, Maura was diagnosed with Parkinson’s Disease.

Parkinson’s disease is a chronic brain illness that affects the part of your brain that controls how you move your body.

It’s often characterised by an uncontrollable tremor or shaking of their limbs, but it can have a lot of other symptoms too.

Johhny said: “My mum had just begin to live her life for herself for the first time, and now she had to deal with an illness for which there is no cure.

“For six months my mum struggled with the diagnosis, not opening up, fearing the worst.

“Then she flicked a switch in her mentality and instead decided to face it head-on.”

Maura sky-dived for charity for her 65th birthday, raising over $5,000.

She traveled solo to Africa, to countries including Burkina Faso and Eritrea, and she thought nothing of throwing her clothes in a backpack and taking an night train to Armenia.

So, taking on a new and enormous challenge, Maura and Johhny are going to climb Japan’s highest mountain, Mount Fuji, for her 70th birthday next year.

They want to raise €9,000 to donate to Cure Parkinson’s Trust to help in the research to fight the disease.

None of the money will be used in any way for their trip to Japan.