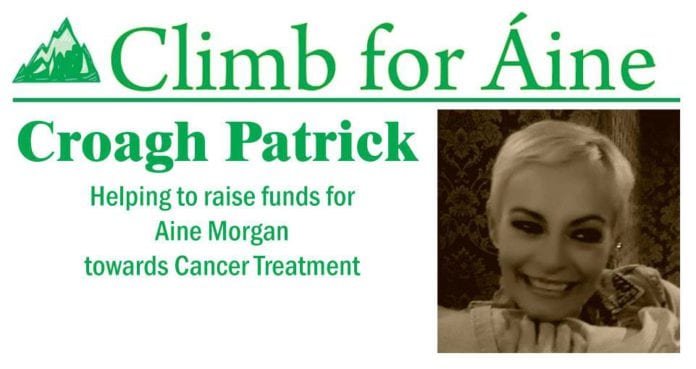 A group of friends are climbing Croagh Patrick this Sunday (16th September) at 9.30am to help raise money for a relatively new and expensive cancer treatment.

They are climbing the peak for Aine Morgan and are trying to spread the word and encourage people to climb.

In October 2015, Áine Morgan, a talented singer received news that nobody ever wants to hear. In was then, just before her 41st birthday that she was hold she had stage 4 inoperable cervical cancer and was given 1-2 years to live.

Always a fighter, Áine undertook intensive radiation, chemotherapy and Avastin treatment which in her own words she describes as “beyond dreadful” but the initial indications were very positive.

Recently however, a new tumour has been diagnosed and Áine’s only hope now is for the relatively new and expensive treatment, pembrolizumab which is an immunotherapy drug.

But this takes time and time is something not on her side. Her only option now is to proceed with the Immunotherapy treatment on a private basis at a cost of €8,500 every three weeks.

While this is not a practical proposition long term because of the massive cost involved, Áine is banking on one of two outcomes – she secures enough treatment and responds well in the short term to significantly reduce her incidence of cancer or maybe even go into remission or failing this the privately funded Immunotherapy treatment buys her enough time to hopefully access a publicly funded trial or treatment programme.

Áine is well regarded in Loughrea and further afield. Her family, her friends, her community and her acquaintances within the music industry are not standing idly by.

A recent benefit concert hosted by Pat & Una McDonagh in The Loughrea Hotel & Spa featured a strong line up of musical talent, including Sean Keane with whom she performed a beautiful duet, aptly titled One More Hour.

The locals also came out in force in atrocious weather conditions some days later to support a 5k fundraising run. To date, a total of €42,000 has been raised but it doesn’t stop there. A group of friends are climbing Croagh Patrick on 16 September at 9.30 a.m.

All are welcome to join in the climb which Áine is hoping to attend. Climb details are available in most local businesses and on Facebook under “Climb for Áine”.

Sponsorship cards are available at Loughrea library and again, at most local businesses or people can donate on the day. Other fundraising ideas and efforts are in the pipeline.

Áine has surpassed the initial prognosis and is still fighting – with the support of a wide circle of people, she is hopeful she can get through this next phase and achieve a positive outcome.

Áine is blown away with the support she has received…….”a million heartfelt thank you’s for your ongoing and continued support……..I will be eternally grateful. I will give it all I have got”

You can support Áine at www.gofundme.com/save-Áine