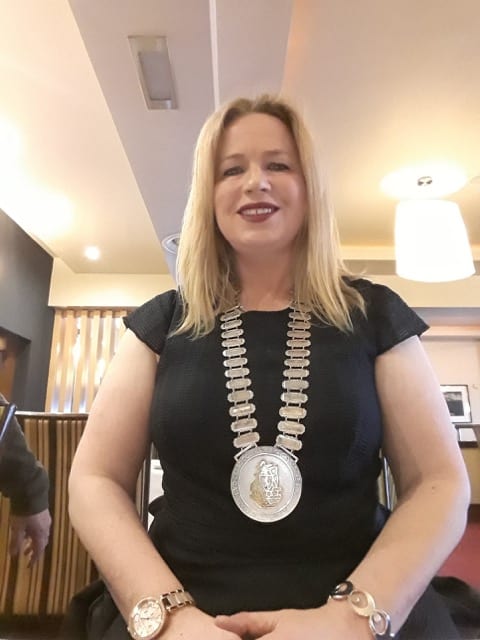 Clarenbridge native and nurse Marian Spelman has been elected as the new President of the Galway Trades Council.

Marian is a nurse working with the Brothers of Charity in Clarenbridge, where she runs a day care service for people with disabilities and autism.

She had been a member of union “on and off” since her days at NUI Galway, but for the last year has been heavily involved with the INMO, where she’s the Regional Secretary for nurses who work in the disability sector.

Speaking about here recent election at the Council’s AGM Marian said, “I genuinely feel deeply honoured. The fact that I was nominated and then voted in. It’s a privilege.”

She’s the third women to have been chosen as President of the Galway Trades Council in its history. At the same meeting another woman, Geri Slevin, was chosen as vice-president.

The Trades Council is a group where representatives of different unions come together to talk about issues that affect all of them.

“We all have our separate issues to deal with as different professionals,” Marian explained, “but we come together as a full Congress of Trade Unions to ensure everyone has equal rights.”

It’s also a place where union members can network, get to know one another and learn from each other on how best to ensure workers get treated fairly.

Marian joined the Trades Council seven years ago because she wanted to see more interaction between the different unions to promote workers rights.

She says that the recession brought people to their knees and many of them are still there. More work needs to be done in the economic recovery to help people back on their feet.

“I generally think that unions have to be more constructive. People were brought to their knees in the recent recession and unions need to promote their strengths.”

“Those include educating and training people, ensuring workers know their rights, have the right knowledge and know who to turn to for advice on work related issues.”

One of the problems facing workers these days is the rise of zero-hour contracts where, “basically, you have no rights.”

In a zero hour contract an employee is not guaranteed any kind regular hours, and doesn’t know when they’ll be working.

In her career Marian, who among her qualifications has a HDip in Applied Communications and an MA in Journalism from NUIG, has worked in many fields including the media.

One documentary on suicide she created with colleague Briain McLoughlin was nominated for a PPAI award, while another on alcoholism won a Strand Two Merit

She sees proper communication as a key part of getting people to understand their rights and how they can enforce them. Not just the unions talking to each other, but reaching out to people.

“We also need to use modern technology and social media as a way of communicating and showing that we are now in the 21st century.”

She points to the launch of the One Galway Initiative in February as way that unions and other groups can come together to ensure workers are treated properly.

Backed by the Irish Congress of Trade Unions, the One Galway Initiative involves all of the Trade Unions, Student Unions and other civil society groups operating in the Galway area.

At its first meeting at the Mick Lally theatre they discussed the effects that precarious work can have, not just on workers, but on their families and the larger community.

Going forward, Marian has a simple approach to what the Trades Council should do, “We need to bring it bak to ground level, back to basics.”