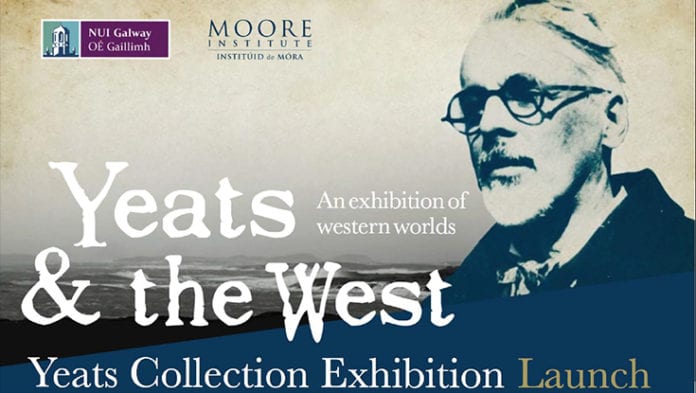 A year after the last trove of artifacts belonging to W.B Yeats and family were sold at auction by his descendants, NUI Galway is exhibiting those artifacts it managed to keep in Ireland.

The Yeats Family Collection was sold at auction in Ireland and the UK by the poet’s adult grandchildren last year, with several items bought by the National Library and other public institutions in Ireland.

There was controversy surrounding the auction as many people said the state should have provided enough money to purchase important manuscripts and much more related to one of Ireland’s most important cultural figures.

For its part NUI Galway managed to acquire items highlighting the arts and culture of the West of Ireland.

They are now on display at an exhibition in the university that draws particular attention to the role women played in renewing Ireland’s culture, and the early days of the literary revival of which Yeats was such an important part.

Curator of the exhibit, Dr Adrian Peterson from the English Department said, “As well as being exquisite pieces of art, these works represent the breadth of culture in the west of Ireland.”

“We get to see famous actors, including a future president of Ireland, in rehearsal; we catch glimpses into the lives of farmers, fishermen, and all the varied fauna of the Aran islands; and view early examples of advertising as pioneering women promote their work in craft fairs.”

As Europe and Ireland celebrates the armistice that brought an end to WWI, some of the items that make it into this exhibit offer a somber reminder of time cut short.

It includes original drawings from Irish artist Robert Gregory, a friend of Yeats and the only child of Lady Gregory and William Henry Gregory.

Born in Galway, Gregory was killed in January 1918 when his plane was shot down over Italy in an instance of friendly fire.

“But it’s not a sombre exhibition. It’s an exciting one,” insists Dr Peterson. “These intimate pieces reveal the talent of unsung artists like Elizabeth Rivers and Elizabeth C. Yeats.”

“As well as more famous ones like Jack B. Yeats and his poet brother W.B. And they tell us how much we still owe to that generation of artists,” he finished.

Included in the exhibition are fourteen drawings of human and animal island life by Elizabeth Rivers, an artist known for the time she spent on the Aran Islands.

These drawings were made for the books Strangers in Aran the last book published by Cula Press which was part of sisters Elizabeth and Lily Yeats feminist art collective.

The sale of the of the Yeats Collection attracted worldwide attention at the time, and a group of academics, writers, artists, and other concerned citizens wrote to then Minister of Culture Heritage and the Gaeltacht Heather Humphries, calling on her to save the collection for the nation.

While institutions were able to raise funds on their own to save some items, many were sold to the highest bidder at auction.

The Yeats Collection Exhibition, with the new acquisitions joining existing artwork, will be on display at the James Hardiman Library until Christmas.