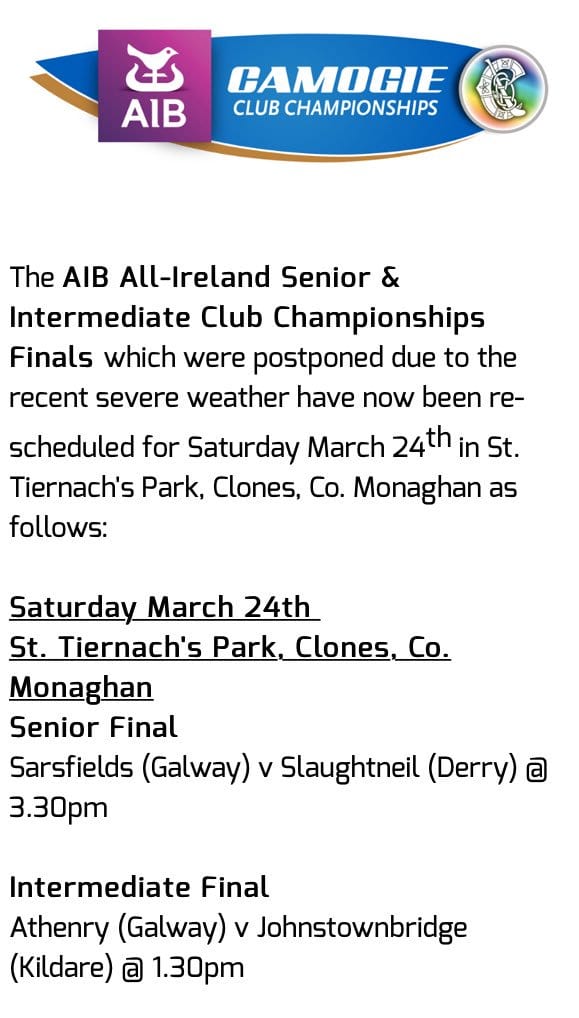 There are days that just turn out more interesting than you expect even if you don’t feel you’ve done anything to justify it.  From 8.30am this morning, it’s been a mile a minute keeping tabs on developments elsewhere even if my own work at home was chiefly procrastinating.

As I mentioned yesterday, the decision to play the All-Ireland club finals in Clones instead of Croke Park has been met with anger especially in Galway.  While the thoughts of going to Monaghan isn’t appealing to all involved, it’s the decision to announce it just four days out that has gotten under the ire of some.

I’ve a feeling this story will run all week but I can’t see anything other than two All-Ireland finals being played next Saturday.  What amuses me is I just got an email being told the decision was taken to protect the pitch.  Now that is the biggest load of crap I have ever heard.

Whatever about the Pilot’s Live conference making logistics difficult, can the GAA explain that one to me?  There was one day of snow last week!  And you have undersoil heating!  It doesn’t stop concerts on consecutive days so how is it going to stop two camogie matches?

You see, in our job, it’s easy fly off the handle and start saying things that can come back to bite again.  I was on the Keith Finnegan Show this morning.  A rare treat for myself though do prefer it if we’re talking about bringing home an All-Ireland title.

But I was asked to chat to Dave O’Connell and you go through the motions.  ‘We feared Croke Park would be unavailable.’  ‘It’s not the going to Clones but the fact it’s not in Croke Park.’  ‘It’s frustrating for players like Therese Maher, Regina Glynn and Jessica Gill who might never play there again.’

It is frustrating and it is wrong!  I genuinely felt the conference might be the stumbling block.  But what are they protecting the pitch from?  Dublin vs Monaghan is a dead rubber!  Dublin and Tipperary was meant to be in Parnell Park originally!  It’s a cop-out!  Nothing more, nothing less!

What would help matters is if the Camogie Association made a statement.  Were they under pressure to play the games next week and if so, by whom?  Why did they decide Saturday and not Sunday?  And did it have to take place next week?

You might remember that I marked down Monday, April 2nd as the ideal date for these games to be played after they were called off last Sunday morning.  Easter Monday!  The day after any league finals!  And Croke Park could have five days rest before any more games, if any!

Was that looked into I wonder?  Yes, it would have a knock-on effect on other teams most notably the Galway minors.  But these are All-Ireland Finals!  You have to play ball when borrowing use of a pitch.  I’m curious did anyone ask about Easter Monday?

While I might get bricks thrown at me for saying this, I have no issue with Clones.  Let me be clear, the games should be in Croke Park!  But if they can’t be, Clones is as good a spot as anywhere else.

The stewards are fantastic!  There’s plenty of parking space beside the pitch and it’s very accessible.  It’s a grand stage for All-Ireland finals.  And it’s nearly two hours away from Slaughtneil so there’s no point going on about them not leaving Ulster.  The Dublin footballers never leave Croker!

But it’s not Croke Park and that’s the biggest problem!  Like Mosney can never be replaced as the spiritual home for Community Games, nowhere else can make up for Croker.  I think one tweeter wrote it’s like telling a child Santa Claus isn’t real.

I’d much more to talk about but I will get there over the next few days.  When I started writing about the camogie, I couldn’t stop.  But I did finally set up an audio editor on my laptop today which will be fun when we start aiming to do other stuff?  And we have chess club action tonight so can’t wait for that.

Also, I didn’t smoke, didn’t think of smoking and didn’t want a cigarette anyway.  And no Nicorettes and just two Wrigleys.  The fun and games never stop.  But what’s happened to the four camogie teams playing on Saturday is no laughing matter.