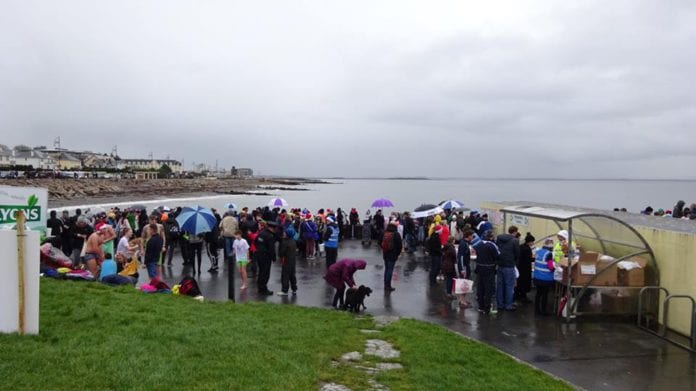 Christmas Day is defined by many things- perpetual hope, love and overeating to name but a few- but for the last 28 years in County Galway, there has also been the COPE swim.

COPE is a charity based in Galway, employing over 100 people, from childcare workers to administrative support staff. They also receive support from more than 150 part time volunteers. COPE Galway’s mission is to improve life for three vulnerable groups of people; the homeless, senior citizens and those affected by domestic abuse. Every year, they hold a Christmas Swim in an effort to raise money for their cause.

Despite a yellow weather warning, this year’s swim was a huge success. Crowds congregated at the pier in Salthill in the icy temperatures of Christmas morning, including esteemed Connacht rugby captain, John Muldoon. He was among the hundreds of people that took the plunge into the frigid waters in the name of COPE Galway.

The charity was first established in the 1970’s, although it has gone under several name changes. Put in place by the Galway Diocese, originally the organisation operated under the name Galway Social Service Council. Once it became a limited company in 1996, this changed to Galway Social Sevrices Limited. They re-branded as COPE in 2000, and eventually in 2008 became the COPE Galway we know today, to clarify that the services all all provided in the county of Galway.

COPE Galway hold plenty of fundraising events throughout the year, but another recent success of theirs has been the Shop Street Sleep Out. On Friday December 1st, local business and community leaders braved the cold of the the streets. With individual targets of 3000 euro, they were up for a tough twelve hours, but they succeeded in their goals.

Between Sleep Outs and Swims, COPE Galway has provided endless support to the less fortunate in our county this year, and will continue to do so in 2018. Their logo (below) is an indicator of how they work. The figure in white is represents a person in need, and around it we see colorful hearts, the hearts of the community within Galway. This logo encapsulates just how invaluable the volunteers and workers of COPE Galway really is, and how their aid really brings color into the lives of those in need of it.