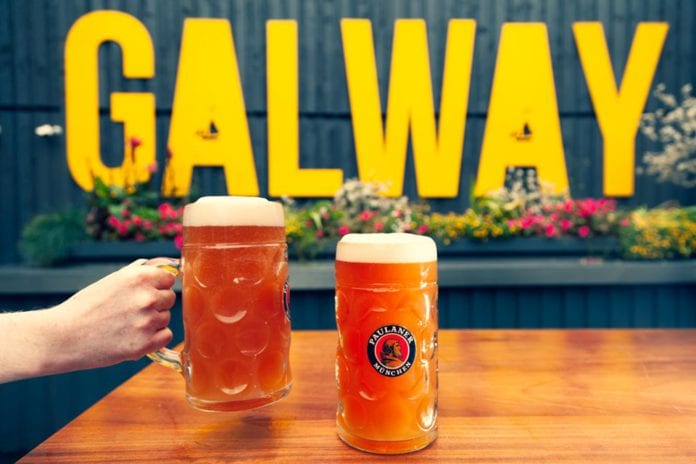 Enjoy the taste of the continent with Oktoberfest right here at An Púcán, where the multi-award winning pub has made itself a Bavarian wonderland.

Grab yourself a full stein of German Paulaner beer and enjoy a delicious Spiced Pork and Apple Bratwurst for just €15 up until October 20th and enjoy the taste of Oktoberfest here in Galway.

The German beer has proven extremely popular since this cross cultural promotion kicked off with a show of strength at half time during the Connacht Rugby match last week.

An Púcán Stein Holding Competition, with 12 hopefuls battling it out to see who could hold a full stein of beer straight in front of them for the longest.

Yes, trying to “lower the weight” of the stein would most definitely have been cheating I’m told, but there are worse ways to lose a competition.

After a fierce showdown Cork native Niall O’Driscoll proved he had arms of banded steel and won himself a trip to Cologne.

Oktoberfest is a world renowned festival that takes place at Munich, Bavaria in Germany every year in September and October, attracting hundreds of thousands of visitors from around the world including Ireland.

People come to love the world renowned German beers and snacks and An Púcán has recreated them here in Galway for anyone who wants to capture the magic.

An Púcán has also created a special snapchat filter for the occasion which has been used thousands of times already.