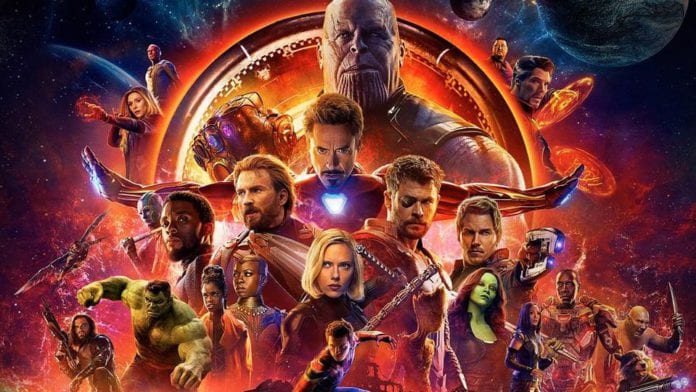 10 years after Robert Downey Junior stepped onto the screen as Iron Man, and six years since it was first teased in Avengers, Marvel is finally paying off on the promise of their shared cinematic universe with Infinity War, bringing together almost every one of their characters for their most ambitiously insane spectacle yet.

More than that, it’s a chance for Marvel to pay off on stories and character arcs years in the making.

Downey Jr’s. Tony Stark has been living in fear of another alien invasion ever since the first Avengers film and he plays Stark as a man barely keeping it together as his worst nightmare comes to life.

He spends most of his screen time sparring with Benedict Cumberbatch’s Dr. Strange as these two massive egos clash.

The mixed pot of characters also makes for some of the funniest moments in the film. Guardians of the Galaxy director James Gunn apparently wrote much of the dialogue for the those characters which helps make them feel distinct from the other Earthbound characters in their typically weird way.

Chris Pratt’s Star-Lord’s insecurity in his own masculinity when they meet Thor is hilarious and his team really don’t help reassure him. “He’s not a dude, you’re a dude. He is a man.” as Drax compares them.

Thankfully the jokes and the banter aren’t crammed into every dramatic moment and scenes of sorrow and real darkness are allowed to hit home without a quip or one-liner.

Chadwick Boseman’s Black Panther gets disappointingly little to work with considering the massive success of Black Panther only recently, and how much of the film is set in Wakanda.

Even at over two and half hours long, there simply isn’t enough time to dedicate to everyone. So, Infinity War relies on you being familiar with your MCU to let the scenes they do have hit home.

This is not an approachable film for people who aren’t familiar with past Marvel movies. The MCU has tried to keep its movies connected but separate. But Infinity War is made completely out of story threads from other films.

The writers of superhero comics, especially the universe spanning crossover events that drag other books into their story, can put whatever the hell they want on the page.

The only constraint to what they can include on a page is how far you push an artist without getting a pen in the eye.

Directors of Infinity War Anthony and Joseph Russo really do bring this sense of scale to the big screen as the film breaks the characters off into groups and zips them from world to world. Each different enough to keep the eye from getting bored.

The madness increases in the fight scenes involving Thanos, as he gets more of his McGuffins and becomes ever more godlike.

His growing power gets shown off in visually distinct and mind-bending ways, better than the usual punch to the face. One scene in particular is so far out there it makes you wonder where Marvel can go from here for Avengers 4.

That said, it just leaves you scratching your head when he does revert to face punching. This guy can literally control reality by now, why all the face punching.

One of the biggest criticisms levied against Marvel films is the lack of any tangible stakes. Every time, in every film, cities are getting invaded, or falling out of the sky, or being menaced by something.

But over the course of 19 films its become pretty clear that the heroes are never in any real danger.

The Russo brothers clearly took this to heart because right out the gate Infinity War opens with a real gut punch. Picking up right where the post-credits scene of Thor: Ragnarok left off, with Thanos attacking the last of the Asgardians on their ship.

It introduces us to Thanos in a brutal fashion that shows off what a threat he is, and lets viewers know that no-one is safe this time.

Meet Thanos, he’s a sensitive, purple guy who likes collecting snazy jewelry and universal genocide. Against a backdrop of approximately  130,000 superheroes (I may have miscounted, maths isn’t my strong suit) Infinity War is really Thanos’ movie.

The Mad Titan is on a quest to acquire the six infinity stones so he can kill half of everyone in the universe. Based on just that brief description you might assume he doesn’t like people.

But what makes Thanos a compelling villain among the very lackluster company of Marvel bad guys is that you can just about understand why he’s doing this.

Thanos truly believes that he is saving the universe from overpopulation and ruination. I wouldn’t call him a sympathetic character, he has far too many many moments of genuine sadism to make you like or agree with him.

Still, the best part of Josh Brolin’s performance is that your sympathy for what he has lost only make the horror of what he is trying to do more poignant.

Thanos’ big raspberry face is better than most fully CGI characters. Still, many of his most emotional moments are undercut by a face that requires seismic shifts to move.

Aiding Thanos are his Black Order. I don’t know that I’d call them henchpeople exactly. Maybe that’s just because I was spoiled being raised on old Bond movies where the Henchman (definitive article) was often as cool as the main villain.

They’re tough cutouts for the Avengers to trade blows with, a plot device for matching up characters who mightn’t otherwise get to fight together.

But they’re still a welcome change from hordes of disposable… you know I don’t think it ever says what Thanos’ army actually is. They’re not the same chitauri from the first Avengers that he loaned Loki. It’s just a horde I guess. Why bother with fancy names when you’ve got a horde.

Infinity War largely pulls of the ambitious goal of fitting so many franchises into one film. Though the scale of it means it at times feels bloated, and other times to slimmed down.

But overall it manages to play into exactly what you’re expecting, only to subvert those expectations completely.