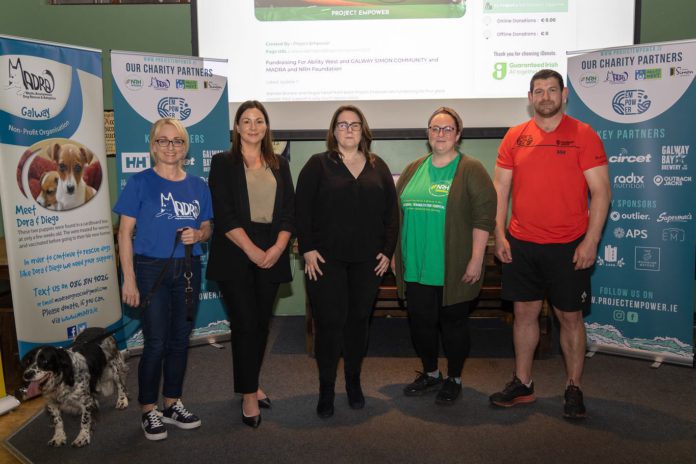 Two men will be undertaking an epic voyage across the Atlantic from New York to Galway in aid of four deserving charities.

Lifelong friends Damian Browne and Fergus Farrell will be rowing unsupported across the Atlantic Ocean next month, a challenge fit only for the few.

All four charities will band together to promote the Project Empower’s fundraising effort by asking people to sponsor each of the 5,000kms of the New York to Galway Bay row.

Those wishing to support the event and their charity partners can do so by visiting here.

Speaking at the launch in the Oslo Bar in Salthill, Fergus Farrell said “Both myself and Damian are honoured to work alongside four amazing charitable organisations to allow us to use our mammoth challenge to help raise awareness and funds for these worthy causes.

“As daunting as the task at hand is, we genuinely can’t wait to get started and we hope our efforts will benefit all our partners.”

Fergus and Damian’s ambitions go beyond just completing the 5,000m voyage, and helping worthy causes, they aim to achieve a world record for the unsupported row across the Atlantic.

This voyage is no easy challenge, obviously, but these two men are definitely the right stuff to try and break the current record.

In the process former Connacht and Leinster forward Damian will become one of only a few individuals to have rowed the Atlantic both ways having crossed from San Sebastian to Antigua in 2018.

In 2018, Fergus Farrell was given a 5% chance of walking again following a workplace accident which left him completely paralysed from below the waist.

Extraordinarily, one year after this grim diagnosis, he walked 206km across Ireland in aid of charity.

The existing record for an unsupported row across the Atlantic Ocean has been unbeaten for the past 120 years.

In total, there have been 52 such attempts, but only 18 of them even managed to complete the crossing.

Of these, six successful crossings have been made by pairs, another six by solo rowers, five by a group of four people, and one team of five.

The pairs world record is held by Norwegians George Harboe and Frank (Gabriel) Samuelsen who were the first pair to attempt the row.

Incredibly after a short break in the isles they continued their row for another five days at sea, to Le Havre in France.

This world record attempt will make waves that will crash records and be felt in every corner of the globe.

More information on Project Empower can be found at their website.