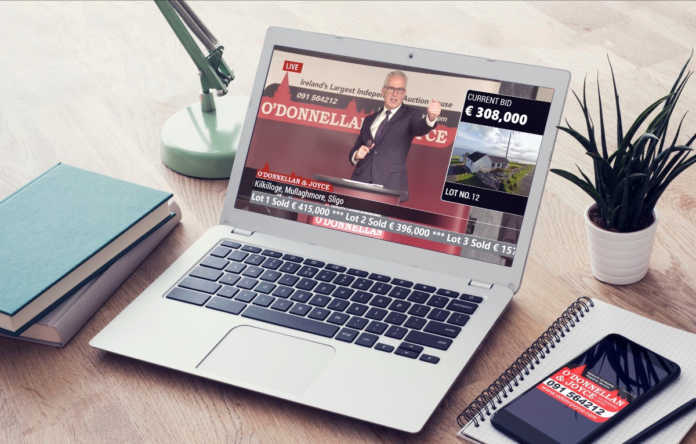 The latest O’Donnellan & Joyce nationwide property auction enjoyed extraordinary success live streaming on Friday, with over €3.1 million in sales made.

The auction saw 30 properties from ten different counties up for grabs, of which 25 sold on the day, a success rate of 83 percent.

Due to the current pandemic restrictions, the auction was live streamed through O’Donnellan & Joyce’s website and social media channels, with bidding taking place remotely.

The continuing strong demand for property, particularly in the west of Ireland, is evident in the substantial value of the sales made on Friday, which was almost €1 million higher than O’Donnellan & Joyce’s last auction in September.

The biggest prize on the day was 4 Rockfield Grove, Maynooth in Co. Kildare, a three-bed semi-detached house which sold for €300,000, the exact AMV it had going into the auction.

But perhaps the happiest seller on the day was the owner of the three bed terraced house at John F Kennedy Parade, Sligo City which sold for €107,000.

Though not the biggest price tag fetched by any of the lots, it was 214% above the advised minimum value of €50,000 set going into the auction.

Three other properties went for more than twice their AMVs: a four-bed terraced house at Walsh Street, Ballina, which sold for €145,000; a fixer-upper detached house at Knockdoemore, Lack, sold for €142,000; and a bungalow at Carrintubber, Kilkerrin, which fetched €62,000.

There were another two properties which went for more than €200k. 25 Temple Lawns, Santry, an apartment in Dublin, went for €234,000; and a detached house at St Martins, Prosperous, Kildare.

Within Galway, the highest value sale was a terraced house at 84 Cluain Riocaird, on the Headford Road, which fetched a price of €180,000.

For the full results of the auction check out odonnjoyce.com/live-auction-results/, or watch the video below to see the action as it happened.