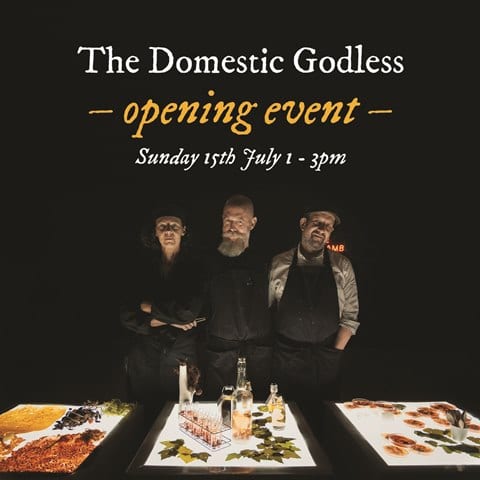 Galway Arts Centre are welcoming anarchist chefs/artists (who knew that was a thing) The Domestic Godless for the next two weeks to show us the strange side of food.

Describing themselves as, “a thorn in the foot of Irish gastronomy” the Cork based food collective are known for their disregard of culinary trends, to put it lightly.

Their occupation of Galway arts centre on Dominick street for International Arts Festival will include slide shows, menus, sculptures and a custom built kitchen.

While they’re in town they’ll have constant samples of their classic and more recent concoctions including the 14- allergen layer cake, a guide to post-industrial foraging and aperitifs designed to combat predatory sexual behaviour in intoxicated males.

On Sunday, July 15 from 1-3pm they’ll be officially opening their exhibition (once the health inspector’s been nice and liquored up).

After that they’ll be there for two weeks July 16-19, from 10am to 5pm every day. Entry to the main exhibition is free for all that want to see what can (if not necessarily should) be done with food.

Since 2003 artists Stephen Brandes and Mick O’Shea, later joined by Irene Murphy, have been using food in humorous and flat-out weird ways to convey… something.

Some of their more infamous creations include the Sea Urchin Pot Noodle, Foot & Mouth Terrine, Carpaccio of Giant African Land Snail and Victorian high tea wrought from all manner of fertilizer.

As well as the main exhibition there’ll be a free children’s event on July 18, and from July 20 on they’ll have a number of performance events.

Tickets for their special performances cost between €5 and €30 and can be booked online.