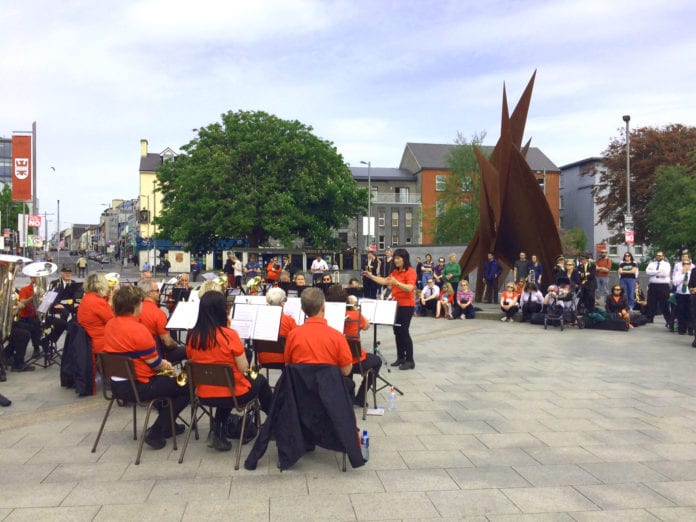 A ‘fairly impromptu’ brass band concert that charmed Galway visitors and residents alike last Saturday in Eyre Square is set to continue through the summer.

That’s according to tuba player and band secretary Shane O’Malley from the Galway-based St. Patrick’s Brass Band, which organised the concert.

The local brass band played along with guest bands from Castlebar and Norway on Saturday afternoon.

Although the concert had been planned, the decision was made to hold it outdoors due to the sunny skies, and O’Malley says the band will continue to play in Eyre Square on summer weekends – weather permitting.

Despite almost no advertising the free event drew quite a crowd – with tourists and Galwegians of all ages smiling and chatting in the relaxed atmosphere of Eyre Square.

“We’ve only just come across it but it’s really really good, really brilliant,” said Amanda Dunne, a Kildare native who was up with a friend on a weekend trip.

St. Patrick’s Brass Band has been a Galway institution for over 120 years. Founded in 1896 as a fife and drum ensemble, the band is comprised of both full-time and amateur musicians from all over Galway.

O’Malley commented: “The purpose of this is just to make connections with other bands and people and spread the love of music. That’s the beauty of amateur groups…We love learners, and we’re happy to help teach music. We’re always up for people joining and learning!”

He went on to say that the band plan to perform in Eyre Square regularly on Saturday afternoons in June and July, “so keep an ear out!”