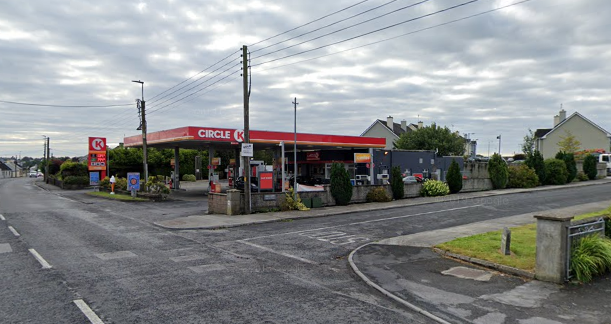 An opportunistic car thief received a three year prison sentence for stealing a car from a Tuam filling station, and selling it off for practically nothing.

Michael Ward (25), of The Gleeb, Tuam, pleaded guilty to stealing a car from a filling station in Tuam on August 3, 2019 before Galway Circuit Court.

Garda Alan Sheeran said that at 6:12am that morning, the injured party was filling the wiper fluid in his car while it idled at the Circle K Station on the Galway Road, Tuam.

While he was doing this, Ward jumped in the open driver side door, and drove with the door and bonnet still open.

The entire incident was captured on CCTV footage from the filling station, and Ward was identified off this footage.

Ward presented him at Tuam Garda Station later that month on August 27, where he made full admissions. He said that he sold the car in Limerick for €200.

At the time, the vehicle was valued at €11,000. It was never recovered Garda Sheeran said.

After receiving bail on these charges, Ward later failed to appear before the court and was arrested on a bench warrant. He then spent seven months in custody before receiving High Court bail, after which he fled the country, only returning in October of 2020.

In a written statement which was read to the court by the prosecution, the injured party said that he had been traumatised by this event.

He was at the bonnet of the car when Ward jumped, and wonders what would have happened if he hadn’t seen Ward before he drove off.

“What should have been a very normal morning turned out quite different. The event has left me vulnerable to the point where I now bypass Tuam altogether.”

He said that he is always nervous at filling stations, and doesn’t feel safe walking at night.

Mr Conal McCarthy BL, defending, said that his client has long standing alcohol problems, and had been drinking heavily the night before this incident, and that morning.

Ward wrote a letter for the court, where he said that he wasn’t in his right mind that night, as his uncle, whom he was close to had recently passed.

He said that he was sorry the injured party lost his car, and that he wouldn’t like to see it happen to his own mother or father.

Garda Sheeran said that Ward is well know to Gardaí in Tuam. He had 55 previous convictions the court heard, including two others for stealing a vehicle.

He said that while there doesn’t always have to be alcohol involved, it would be a “major factor” in Ward’s offending.

Mr McCarthy also said that Ward is separated from his partner, and has little access to his children, which had affected his state of mind.

Judge Rory McCabe said that it was a “brazen and reckless” crime, which stood at the higher end of the scale of gravity.

After considering mitigating factors, Judge McCabe said that a three year sentence would be appropriate, and gave Ward credit for time already spent in custody.

Briain Kelly - June 30, 2022 0
Merlin College in Doughiska has been awarded DEIS status by the Department of Education, Minister Norma Foley has confirmed. Delivering Equality in Schools (DEIS) is...