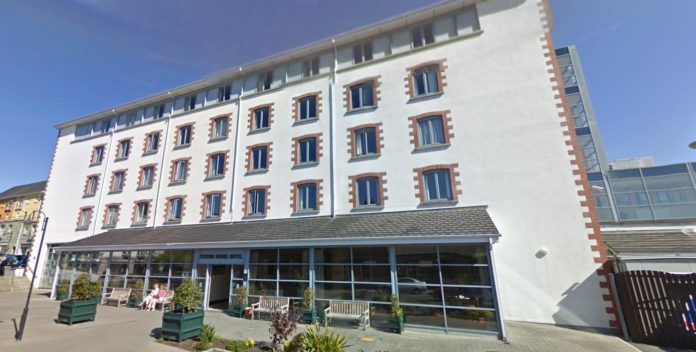 Intense argument over the nature and value of guidelines for the operation of the hospitality industry dominated much of the first day of the ‘golfgate’ trial at Galway District Court.

Galway TD Noel Grealish and former Fianna Fáil Senator Donie Cassidy, along with hoteliers James and John Sweeney appeared before a special sitting of the court for the opening of the trial on Thursday.

They have all been charged with organising or allowing to be organised an event that contravened COVID regulations at the Oireachtas Golf Society dinner at the Station House Hotel in Clifden on August 19, 2020.

Prosecutor Eoghan Cole BL said that the state contends that they organised an event with more than 50 people in violation of public health regulations in force at the time, and did not take all reasonable steps to ensure it wouldn’t exceed the legal limit..

Colm Smyth SC, counsel for Donie Cassidy of Castlepollard, Westmeath came out swinging by saying that his clients actions were based on guidelines published by Fáilte Ireland, which the “entire hotel sector” relied on.

He said that these guidelines were created by Fáilte Ireland and the Irish Hotels Federation in concert with the government, and bore its stamp.

These guidelines allow for more than one gathering to take place indoors, he said, which is why the dinner was separated by a moveable partition wall.

Mr Cole said that it would be a “distortion of reality” to say that there were multiple gatherings, and later reiterated that the guidelines do not have the force of law.

Edward Walsh SC for John Sweeney said that the context of the guidelines need to be clarified, and that they were created by the state liaising with the industry.

He said that the state now appears to be trying to disassociate itself from those guidelines.

Michael McDowell SC for Mr Grealish, of Carnmore, Co. Galway, emphasised that this was a two day event, and that his client only organised the Captain’s competition on August 18, a golf event.

He had no role in organising the President’s dinner which took place on the 19th, Mr McDowell said, which is the subject of the charge.

Ms Constance Cassidy SC, for James Sweeney, said that it is strange that the company of which her client and his father are directors is not being prosecuted, but they are.

During the second half of the day the court heard from numerous witnesses who were also at the event.

Among those, Senator Aidan Davitt said that he stayed at the Station House from August 17 – 19 and thought the hotel staff were extremely professional.

He said they were “on top of their game, particularly in relation to Covid”, and that James Sweeney met him as he arrived and impressed the need for mask wearing.

He said that during the dinner he was sitting in the back room, with maybe 30 people spread across four or five tables.

There was no mixing between tables, which was taken extremely seriously, he said, and the barman behind him insisted he had to order from the waitress.

“I haven’t been at an event before or after in Covid times that has been as well regulated,” Senator Davitt said.

Former Captain of the Guard at Leinster House John Flaherty gave evidence that he satisfied himself that the event was compliant with public health guidelines before attending.

He said that he called the hotel himself on two occasions, and staff assured him that all precautions were being taken. He also spoke with Donie Cassidy about the dinner.

During the dinner he was in the front room, with approximately 45 people spread across six tables, he said. The two suites were separated by a floor to ceiling partition

He said the dinner was followed by a short set of speeches and a prize giving ceremony, which lasted for about 20 minutes, after which everyone “dispersed in a very civilised manner” and didn’t hang around.

When questioned by Mr McDowell he said that Noel Grealish was a “stand-in” captain for the golf event.

Mr Flaherty also said that the owner and general manager of the hotel, Mr Sweeney Jr & Sr were very hands on in ensuring people were complying with Covid requirements.

He said that he saw nothing at the Station House which concerned him, and that he was satisfied the day was Covid compliant.

Towards the end of the day, the written statements of a number of witnesses were read into the court record.

The case continues this morning before the court.