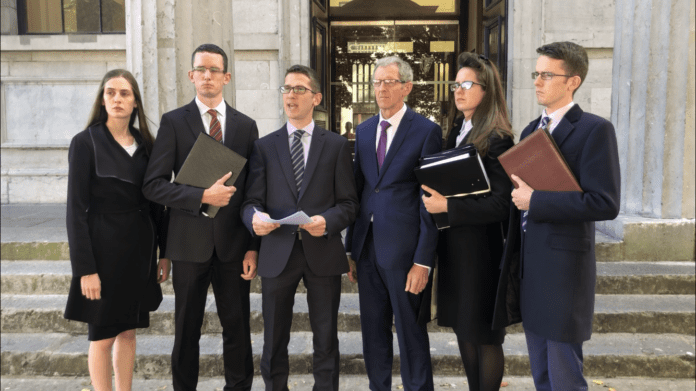 There was more drama this week at Galway Circuit Court in the ongoing case of the four Burke siblings against NUIG.

The Burkes received a lifetime ban from all student societies at NUIG in 2014, in what they say was an act of discrimination based on their religion.

However, NUIG has said that the ban was due to misuse of funds from the Christian Union and Life societies, which the four plaintiffs deny.

Their case, which was originally supposed to run from June 18 – 20 at the Circuit Civil Court, has been removed from the court lists since the Burkes requested that the judge recuse herself on the opening day of proceedings.

The case was removed from the lists after the Judge ordered a stay of proceedings following their request, which effectively suspended the action against NUIG for the time being.

On Thursday morning the four siblings came to the courthouse regardless, where Isaac Burke stood up during the courtroom proceedings and asked if another judge would be appointed to their case.

The judge threatened to have them removed from the courtroom as their case was not on the list and was not being heard that day.

The Burkes, who are representing themselves in this action, remained in the courtroom until around 1pm in the afternoon.

Later the family voiced their displeasure that their case “has not even begun to be heard” at the end of the three days it was supposed to run through.

Speaking on behalf of the family Issac Burke said that “we have had a lifetime ban hanging over us for four years. The impact on our professional and personal life has been profound”.

He also claimed that their health had suffered as a result of this ban.

All four of the siblings in question have been NUIG students at one point or another, and two are still studying postgraduate courses.

Before the ban the Burkes had been putting up posters and handing out flyers with material related to their beliefs including opposition to abortion and gay marriage.

They allege that they were subsequently targets of a campaign of “bullying, harassment and intimidation” which the university ignored.

NUIG lifted the lifetime ban against the four siblings shortly before the case was due to come to court.

On the opening day of the case on Tuesday the counsel for NUIG raised the fact that the ban in question had been lifted.

Judge Petria McDonnell questioned whether this would render the matter moot, which led the Burkes to accuse her of prejudging their case and asking her to recuse herself.

The judge denied that there was anything improper in remark and that she was merely asking a question.

There was some drama that day as gardaí eventually had to be called to the courthouse when the siblings refused to leave at the end of the day without speaking to the judge.