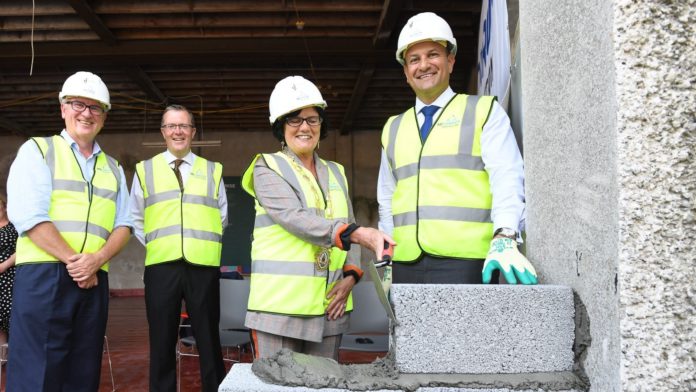 Tánaiste Leo Varadkar was in Galway City on Friday to turn the sod on the €1.6 million expansion and relocation of the PorterShed to Bowling Green.

Work on converting the old warehouse at Bowling Green is expected to be completed by the end of this year, and will deliver room for 130 co-working desk spaces.

The Portershed, located behind Ceannt Station, opened in 2016 and quickly became a hub of start up businesses and tech innovators who needed workspace.

However, the GCID now has to move out of that location due to the large scale redevelopment of land in the area, and the station itself.

The Bowling Green project is one of two that GCID is advancing to expand its operational capacity.

Going hand-in-hand with the Bowling Green warehouse redevelopment is the revamp of the former Connacht Tribune offices neighbouring it, which is then expected to open mid next year.

The combined value of the two projects, which are back by Enterprise Ireland and the Department of Enterprise, Trade and Employment, is €4.5 million.

Maurice O’Gorman Chair of Galway City Innovation District said that this project is a “key milestone” in the history of the GCID.

“The creation of high value sustainable jobs in the West of Ireland is fundamental to the growth of the region,” he said, adding, “We very much look forward to opening the Bowling Green site and expanding our footprint in Galway.”

“The PorterShed was never just a building, it has always been about building a community facilitating innovation and creating world class companies in the West of Ireland.”

In the five years since the opening of the PorterShed, it has supported the creation of more than 800 jobs in Galway, and its members have had investments of over €35m.

GCID is expanding its footprint in response to the high demand for city-centre locations for tech start- ups, which has already outgrown the original PorterShed’s footprint.

Tánaiste Leo Varadkar said that this expansion will help enhance the west of Ireland’s reputation as a hub for the tech industry.

“The PorterShed’s expansion with these two new GCID buildings is highly anticipated by the tech community in Galway. Innovation hubs offer much more than desk space. They provide a supportive environment, mentoring, and programmes to start and scale innovative tech businesses.”

“The start-up journey comes with all the usual challenges of starting a business, as well as the uncertainty of launching something totally new.”

“The PorterShed community also gives start-ups access to other founders who have been on this journey and can lend their support.”

“I congratulate GCID and Enterprise Ireland on this achievement and look forward to my return visit when the hub opens its doors.”

Galway jobs in the pipeline with Ethos Engineering expansion

Two day festival at Claregalway Castle comes to a close