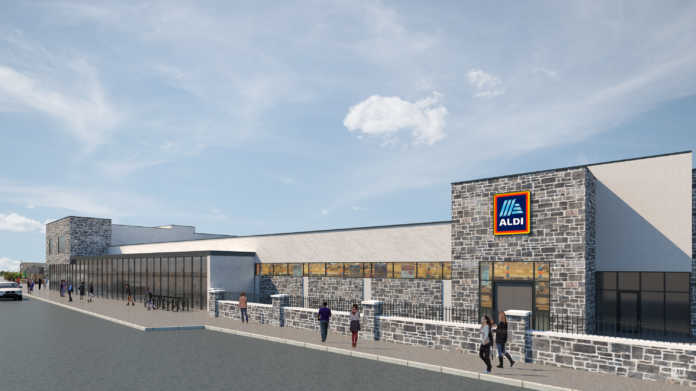 Aldi plans to create up to 60 new jobs in Galway with the opening of two new stores in Ballybrit, Galway City and in Tuam.

The discount supermarket has said it intends to lodge a planning application with Galway City Council this week for a new store on the Old Monivea Road in Ballybrit.

Construction work on a store in Tuam is also due to get underway next year. Planning permission for that supermarket on the Ballygaddy Road was upheld by An Bord Pleanála earlier this summer.

The new store in Ballybrit will have a floor space of 1,254 m², and will be 100% powered by renewable energy through solar panels on the roof the company said.

There will be 80 car parking spaces available for customers in addition to 12 bike parking spaces,.along with four free to use electric vehicle charging stations.

Each store will create roughly 30 permanent jobs when complete Aldi says, with the Tuam store expected to open in 2022.

Commenting, Colin Breslin, Aldi Regional Managing Director said: “We are working to bring our unbelievable prices and value to more families in Galway.

“Galway is an important market for Aldi and we have plans to open two more stores in the near future.”

“Our commitment to our customers is that we will never be beaten on price and will always provide the best value.”

“Our Swap & Save campaign reminds shoppers about the saving that can be generated by swapping their weekly shop to Aldi.”

Aldi’s Galway stores participate in its national partnership with FoodCloud, donating surplus food to local charities daily.  The Galway stores have donated over 48,000 meals to charity to date.