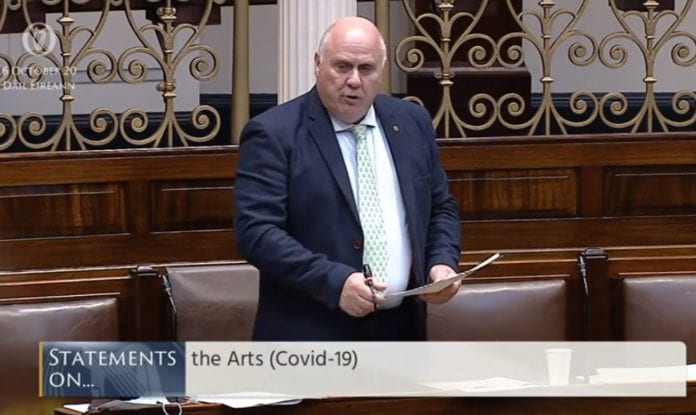 Up to 2,000 jobs in the arts and creative sectors Galway, Mayo, and Roscommon are in danger due to the devastating impact of COVID-19 a Galway TD has said.

Speaking in the Dáil this week Galway West TD Noel Grealish said that there is “no end in sight” to the losses being endured by the arts and creative sectors, which are predicted to be among the last to recover from the COVID-19 crisis.

The creative economy is worth up to half a billion euro a year in the region Deputy Grealish said, and supports up to 7,000 jobs either directly or indirectly across the three counties.

“The prediction is that losses as a direct result of the Covid-19 pandemic in these counties will be at least 25%. In real terms, that is up to €150 million lost to the region’s economy and the jobs of up to 2,000 people lost or in serious jeopardy.

“A report carried out by NUI Galway for the Western Development Commission a few years ago came to similar conclusions about the value of the creative sector, including everything from craft and culture to creative industries.”

This is about more than just preserving cultural offerings, but “putting food on the table” for thousands of families Deputy Grealish said.

“It has been a terrible year for everyone involved in the arts and the creative economy but nowhere more than in County Galway, which had such a promising year in store.”

2020 was due to be a massive year for the arts in Galway with the European Capital of Culture taking place this year, alongside the regular offerings like Galway International Arts Festival.

Galway 2020 was forced to cancel months of events due to the national lockdown, and has only recently begun staging events once again, with a revised format continuing into 2021.

Galway Arts Festival also managed to reconfigure its offering for Autumn, with a revised programme that, while lacking the big concerts at Big Top, still had a captivating array of online events, and the Mirror Pavilion installation which recently finished its time at the Claddagh Quay.

Baboro Children’s Festival is also underway in Galway until October 18 with a revised programme that brings live events into your own home virtually.

During this Dáil session devoted to statements on the Arts and COVID-19, Minister Catherine Martin said that the Arts Council received an initial allocation of €80 million for 2020, which was increased by 30% to €105 million to help deal with the COVID-19 crisis.

Other monies were also allocated to cultural institutes and Screen Ireland in the July Stimulus Minister Martin said.

Deputy Grealish said that money invested in the arts generates additional revenue in the economy, pointing to the 481 tax credit, which aims to help the growth of Irish film, tv animation, and documentary as a prime example.

“There is a return for such money as was highlighted in a report commissioned by the Government two years ago entitled An Economic Analysis of the Audiovisual Sector in the Republic of Ireland.”

“The report showed that while Government support has played an important role in assisting the audiovisual sector to grow, the film tax relief delivers value for money on both the fiscal net benefit and economic benefit basis.”

“Every euro of section 481 outlays generated an average €2.82 in economic net benefit for the economy and it returned a minimum of €1.02 in tax revenue to the Government.”

The Independent TD asked that the government keep incentives for the arts in mind when laying out the coming budget 2021.

“I am aware there is a huge demand from all sectors for a share of the limited pie of the country’s finances. It is, however, an area that badly needs support and will be among the last to eventually recover as the Government has acknowledged.”