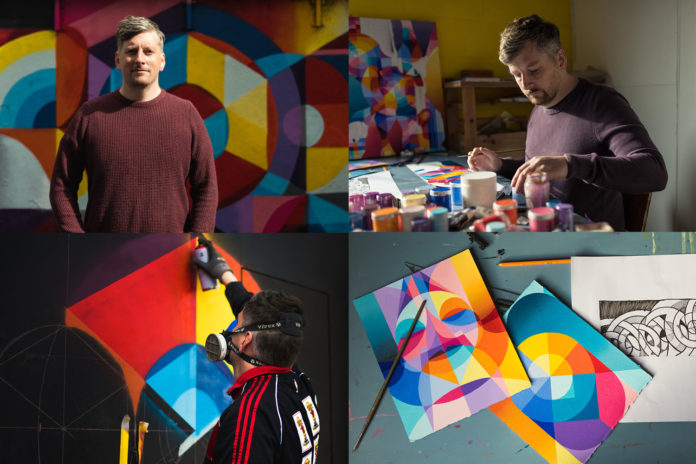 Galway City based visual artist Shane O’Malley is featured in a new series of short films depicting the artistic process of some of Ireland’s hidden creatives.

The Samhlú Croí Cruthaitheach films are produced by Galway based Heavy Man Films and are available on the TG4 player.

Shane’s work explores colour, forms and symbols through painting. It is a meeting point of a studio practice and mural art painted in public spaces.

Shane, who is originally from Meath, began painting graffiti in 2001 drawn to the act of writing his name, which was creative in one way while destructive in another.

Drawing and painting created the habit of processing through the act of making. Shane’s artwork has explored personal themes that developed into bodies of work – ‘Madness vs Reality’ (2014), ‘Duality’ (2017) and ‘Order and Chaos’ (2018).

Through the work, Shane explored the balance and tension in contrasting colours, the order found in complementary colours and harmonious tints.

Shane is drawn to both the meditative slow process of painting with a brush in the studio and the faster act of spray painting and making art in public spaces.

He has painted graffiti and murals around Ireland and Europe. His artwork is now held in private collections in Ireland, the UK, Norway and the US.

Briain Kelly - November 26, 2022 0
The number of homeless families in the west of Ireland has gone up in the latest government report for October. There were 101 families living...