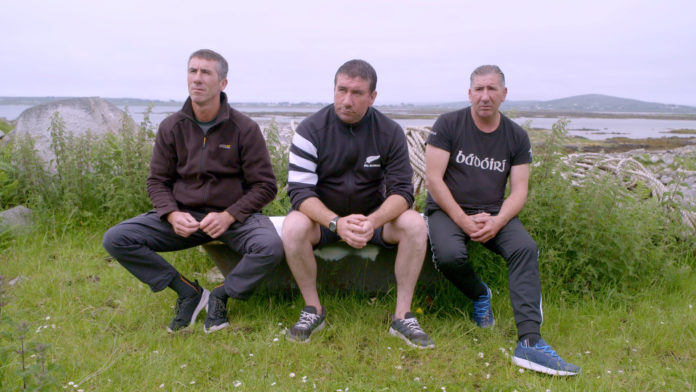 A new documentary on TG4 will focus on Clann Johnny Jimmy Pheaitín – a well-known family of mariners in Connemara.

In Bádóirí- Na Jimmy’s, viewers will get to know brothers Pádraig, Jimmy and Seáinín better, and some of the other relatives who have brought glory to Inse Mhic Cionnaith island and the town of An Cheathrú Rua.

Even though their Galway Hooker, An Mhaighdean Mhara, has been anchored for much of this season, the lads are kept busy sprucing up their Hooker and calling into their relatives who are building new boats.

The trio are not sailing ‘An Mhaighdean Mhara’ this year, they are to be found by the shores of Greatman’s Bay working on the Hooker, or visiting their relations who have their own maritime projects.

Shipwright Pat Michael is coming close to finishing his Galway Hooker, a piece of art being built in the shed next door to home, and the Jimmys’ uncle, Johnny Jimmy, tells how he and his two brothers were the best rowers in Ireland and in England in the 1960s!

John Darba introduces us to the island where he was raised, Inis Mhic Cionaith recalling those days long ago when he used to listen to the wonderful stories of ‘Jimmy an Oileáin’.

Johnny Healion reminisces about a time when the Mhaighdean Mhara was still hauling peat to the Aran Islands, as he now prepares to launch his most newly built Hooker.

Intertwined throughout this programme, the three brothers, Pádraig, Jimmy, and Seáinín, tell the wonderful life they have had by the coast and at sea in the last half a century.