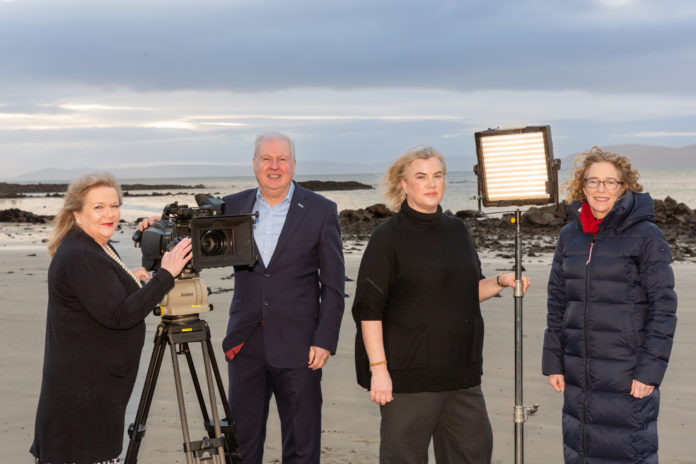 The Connemara company Atlantic Academy has been chosen to lead the charge in training film and tv production crew in Ireland.

Screen Ireland has chosen the Spiddal based company to be the lead organisation in developing three film and tv crew hubs in Ireland.

The hubs are being developed to produce highly skilled production crew for the film and tv sector, which is currently experiencing unprecedented level of activity.

There has been a massive growth in filming in Ireland by not only national broadcasters, but also international film studios and streaming platforms.

Siobhán Ní Ghadhra, CEO of Atlantic Academy said “We’re needless to say thrilled to be one of the three crew hubs to develop much needed crew and talent for the TV and Film Sector nationally.”

“We see the absolute need to develop and expand the talent pool.  We also plan to respond to the industry requirements, by providing bespoke and inclusive training programmes.”

“Training for Irish language productions will also be a priority for Atlantic Academy. This is an excellent and much needed response and creates future viability, jobs and career possibilities in the Film and TV Sector.”

The three hubs will see €1 million in funding invested in their development, complemented by a further €1.2 million that has been invested in the National Talent Academies for Film and TV Drama, of which the Galway Film Centre is the lead organisation, and the Animation Academy.

Atlantic Academy is a Gaeltacht training company for the film and tv sector, which was created by Spiddal based Danú Media, co-producers of Ros na Rún.

Atlantic Academy –will operate from an Chuasnóg, where the TG4 drama series is filmed on a purpose built TV drama studio set.

Minister Catherine Martin said that there is huge potential for the film and tv industry in Ireland.

“Not only are we seeing a thriving domestic screen industry, but Ireland is becoming a major international location for film, television and animation production.”

“This is founded on the talent that exists within the country and we must develop this further to maximise this potential.”