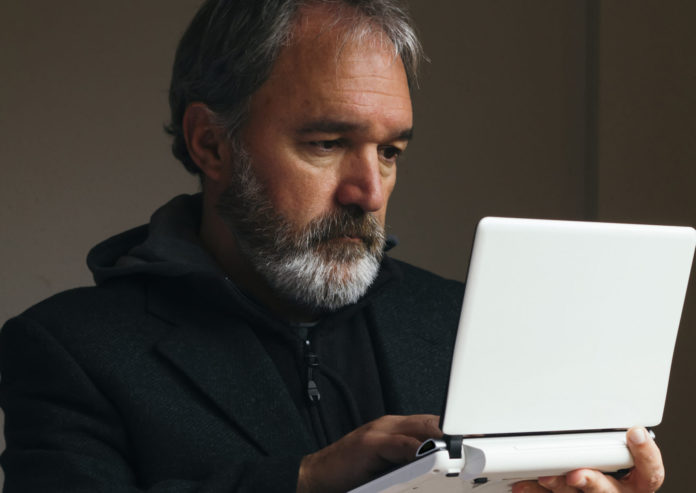 When Rye Aker arrived in Ireland in late 2019, his task was simple: to record Galway’s European Capital of Culture adventure in poetry, so that it would form part of a book on the year; twinned with another one that a separate poet was writing about the shared capital in Rijeka in Croatia.

54-year-old Aker had backpacked around Ireland as a student of linguistics and had amassed a love for Irish expression, humour, melancholy and culture.

To him it seemed the ideal commission. A chance to have an existence where he would survive on the proceeds of his work alone, eschewing luxury for a simple life of living and writing and making new friends.

“The prospect excited me. But like the best documentary projects, it snowballed into something else,” he said.

“I have come here and made friends, but early 2020 was waylaid by unbelievable natural disasters. Storms that lashed the west coast; waves that upturned cars; floods that made hard farmers cry and a virus that shut down the earth.

“The main reason I came here has been sadly shattered by the Covid-19, but this has not deterred me from portraying this beautiful place in words and common expression. I have amassed maybe five thousand expressions from friends, and from research and I hope to use many of these in my work.

“My agent Dirk de Vries told me that as the project was suspended, I had the option to come home. I had planned to move on to another project in Luxembourg, but that too was up in the air. So, I decided to stay and record a country in crisis and chaos and lockdown.”

Aker has become a familiar figure in Galway, taking opportunity to surreptitiously attend events and eavesdrop to pick up new expressions, nuances, traditions.

He famously over-attended the Solemn Novena in Galway Cathedral last year, attending three services a day for nine days, not knowing that he only needed to attend each one daily.

He has clearly fallen in love with Galway and Galway with him, although he is at pains to stress that his role as a sort of local poet laureate for the age is an unofficial one.

“I am conscious of the many great poets in the west of Ireland. I am not like them, I am different an I hope I am not stepping on toes, so I keep a low profile and avoid the going out,” he said.

However what has emerged from his stay is some of the finest contemporary observational poetry seen in this country for some time. The modest Aker has been featured in the New York Times, CNN, BBC with work that has spanned the social, the humorous, the tragic, all observing Irish life as only an outsider can see.

His poems such as A Penance of Sundays, The Last Avocado in Recess, The Man With The Clock all hit home as did his poem dedicated to Vicky Phelan called Vicky In The Flat which had more than a million views on twitter.

Other poems include When Fungie Fecked Off; The Horse Who Sat On The Dead Man, The Extra Hour In Bed and All Togged Out, commissioned by AIB for its The Toughest GAA campaign.

A generous tome, his first book was called Fifty Akers- A Penance of Sundays; this new one, A Hundred Akers – To Be Among, the second of two collections each holding fifty moving poems.

“In my first collection of poetry from Galway called A Penance of Sundays, I recalled a year in which I had experienced a piece of Galway entering Covid, and was then able to compare the two.

“In this collection, To Be Among, my poems are my complete immersion into an Ireland in lockdown, experiencing the ups and downs along with the rest of the population, sharing tough times, funny times and strange times with a people who are very close to my heart.

“None of this has been like I thought it would be, but I have to say that this has been the best year of my life. I have left my mobile cellphone back in Holland. I check Twitter messages just every week or so in my splendid semi-isolation. I have been interviewed for some newspapers and radio but I keep to myself and my small collection of great friends who taxi me here and there, and who help me deliver books to shops.

“I meet people on the street and they greet me and praise the poems and I am so grateful for this, because it means that the poems are connecting, but I have no interest in being the luvvies,” he said.

Aker’s work was commissioned by AIB for their The Toughest GAA campaign; his poem All Togged Out given on condition that all fees go to the charity.

“I have offered my services with no fee to many charities and I remain willing to do what I can to use my words to help those people who are at this very moment helping someone else. Life is short, my friends.

“If my words can bring a laugh or a moment of reflection, I am glad to do so. If I can raise funds or make a highlight of the work these people do, I will be of service.”

“For now, I hope people enjoy my work. The west of Ireland has given me wonderful expressions and I hope they live on in my work,” he said.

Hundred Akers – To Be Among by Rye Aker is available online and also from Kenny’s Bookshop, Galway. You can follow his latest work on twitter and instagram.