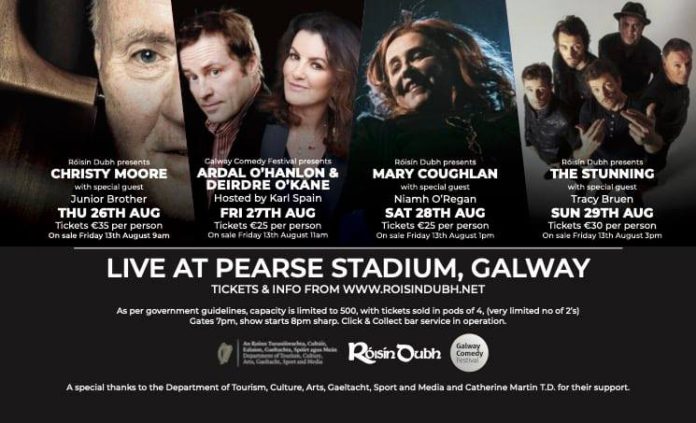 Galway is kicking its return to the arts into high gear this month, with yet another set of live comedy and music gigs coming to the city.

Pearse Stadium will host four special events towards the end of August for people starved of entertainment, with a stellar lineup organised by the Roisín Dubh and Galway Comedy Festival.

International musical icon and national treasure Christy Moore is kicking of the weekend run in style on August 26, where he will be supported by rising star, Junior Brother.

The following evening is a superb comedy double header as Ardal O’Hanlon and Deirdre O’Kane go back to back with Karl Spain as MC for the night.

The Saturday, August 28 will be an anniversary extravaganza for musical legend Mary Coughlan, as she celebrates 35 years since the release of her debut album Tired and Emotional, a fitting description for us all after the past 18 months.

The first half of her set will be a celebration of where she began, followed by a look back at the greatest hits of all the decades since then. Mary is very ably supported by the talented and captivating, Niamh O’ Regan.

The final gig in this four night extravaganza is by The Stunning on August 29. Who else could round off a line-up of such talent? This is a hometown gig which should blow the roof off the Pearse Stadium stand. They will be supported by multi-instrumentalist and spellbinding vocalist, Tracy Bruen.

Tickets went on sale on Friday, where Christy Moore and The Stunning were quickly snapped up.

But there’s still a chance to catch the comedy stylings of Ardal O’Hanlon & Deidre O’Kane, or the greatest hits of Mary Coughlan.

Tickets for these unmissable gigs are available on roisindubh.net.

Briain Kelly - November 29, 2022 0
Some traffic disruption is expected in Salthill for two days this week due to roadworks taking place. Galway City Council is installing pedestrian crossings at...