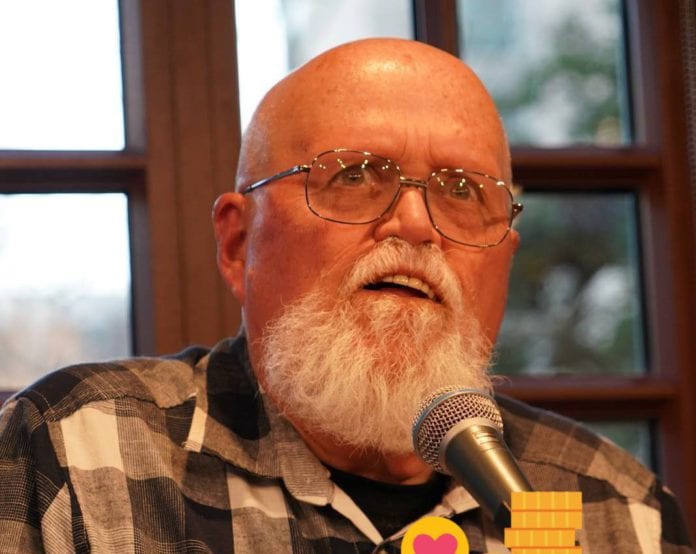 Over the Edge is continuing strong this month, giving poetry lovers in Galway a much needed cultural outlet, and using the online format to bring in guest readers from all over the world.

The next Over the Edge: Open Reading takes place on Thursday, September 24, on Zoom at the usual time of 6:30-8:00pm Irish time.

The Featured Readers are Fintan Coughlan, Molly Harris, & Ron Silliman, with an Open Mic for all afterwards, where new readers are always welcome.

Fintan Coughlan grew up in Mount Bolus, Offaly, but has lived in internal exile in Galway for enough years to eventually be adopted.

He has been writing poems for such a long time he can’t remember when the habit began.

His poems have been published previously in Salmon magazine, The Connacht Tribune’s Writing in the West, The Cúirt Journal, and most recently in The Galway Advertiser’s Vox Galvia.

You find her short stories and nonfiction in journals such as Furrow, Hooligan Magazine, and Vagabond Literature.

Language poet Ron Silliman has published over 40 books, including The Age of Huts, Tjanting & The Alphabet, the anthology In the American Tree, a collection of criticism The New Sentence & an award-winning memoir, Under Albany.

He has received the Poetry Foundation’s Levinson Award, been a Kelly Writers House Fellow, & the subject of symposia at the Universities of Paris & Windsor, and teaches at the University of Pennsylvania.

Anyone interested in taking part in the poetry open-mic should text Kevin Higgins on 087-6431748 or email over-the-edge-openreadings@hotmail.com between 6pm and 6:30pm on the evening of the reading.