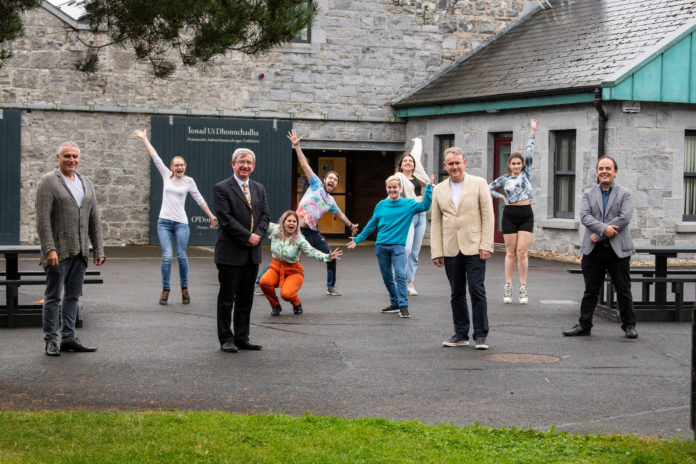 NUI Galway and Galway International Arts Festival (GIAF) have joined forces to herald the role of the University’s graduates in this year’s theatre productions.

Former students feature in over half of the shows at this year’s festival, working behind the scenes and on stage to bring drama, arts and culture to audiences as they flocked back to live, in-person events.

Among the alumni are recent graduates from the BA in Drama who took part in the SELECTED programme this summer and went on to work as stage manager, assistant stage manager and props person on Cogadh Na Saoirse.

Others are playing key roles in the performances on stage, with actor Catherine Denning, a BA and MA graduate, featuring in Branar’s Sruth na Teanga, while Cogadh na Soairse was written by MA graduate Philip Doherty and After Love was written by BA graduate Dani Gill.

NUI Galway graduates are also working on the Abbey Theatre’s Happy Days on Inis Oírr and Druid Theatre’s The Seagull.

Patrick Lonergan, Professor of Drama and Theatre Studies at NUI Galway, said: “We began partnering with Galway International Arts Festival from our shared desire to ensure that the next generation of theatre-makers and artists would have the skills and experiences needed to build sustainable careers, both here in the west of Ireland and in other national and international contexts.

“Through programmes like the SELECTED internship scheme, our students have gone behind the scenes to meet artists, producers, and other professional experts on GIAF shows.

“We’re seeing the fruits of that approach now, with more than half of this year’s theatre productions featuring recent NUI Galway graduates.”

John Crumlish, chief executive of the Galway International Arts Festival, said that GIAF’s partnership with NUI Galway on SELECTED has been very rewarding.

“We always envisaged the programme being a support for young people who wanted careers in culture, so we are delighted to see alumni working for arts organisations that are part of the festival programme itself,” he said.

“We hope to work with NUI Galway to further develop the programme over the coming years and play our part in developing the careers of the next generation of arts professionals.”