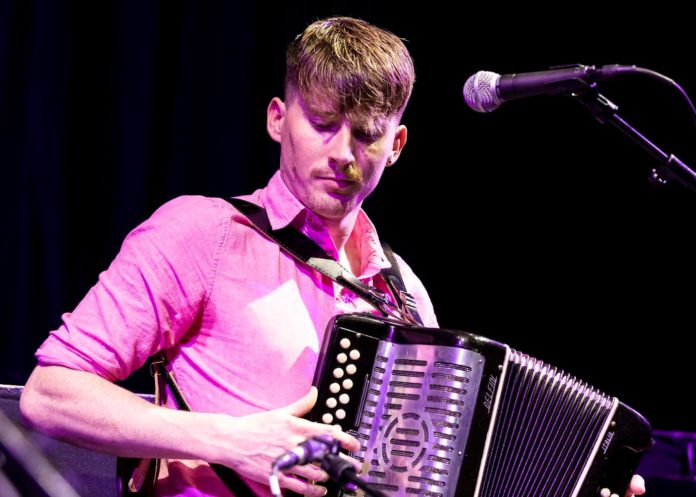 Ireland’s largest trad and folk music festival is inviting audiences to experience extraordinary live music in Temple Bar, across Dublin and into Fingal.

Showcasing the best of established and emerging musical talent since 2005, TradFest Temple Bar will once again bring trad music to growing audiences in Ireland and across the world.

Among those taking part this year will be TG4 Ceoltóir Óg na Bliana (Young Musician of the Year) for 2019, Conor Connolly.

Conor is a button accordion and piano player and singer from Clarinbridge in Co. Galway.

Coming from an area steeped in Irish music, he was destined to play the accordion with players like Joe Cooley from the locality and Joe Burke from whom he took lessons.

He started playing tin whistle at the age of eight and with encouragement from his parents moved onto the accordion aged 12, going to lessons with teacher Mary Murray in Athenry.

He then attended the Anne Conroy Burke and Joe Burke school of music in Kilnadeema near Loughrea for a few years while playing with the local Kilnadeema branch of Comhaltas Ceoltóirí Éireann and local musicians.

In his late teens, he heard the music of Joe Cooley for the first time, as well as other players Tony MacMahon, Fiachna Ó Mongáin and Eoin O’Neill which spurred him to change from the conventional B/C style of playing to the C#/D system.

Charlie Harris, who lives locally, was also a great source of inspiration and encouragement introducing him to the music of the 78rpm era and such players as P.J Conlon of Milltown, Co. Galway, Sligo fiddlers Morrison, Killoran and Lad O’Beirne.

The influence of Uilleann piping is also discernible in his music, particularly that of Willie Clancy, Séamus Ennis and Seán McKiernan.

During the summer of 2016 he was also the musician in residence for the ‘Tunes in the Church’ concert series which runs in Galway city.

He has featured on broadcasts on RTÉ, TG4, RTÉ Raidió na Gaeltachta and Clare FM and represented Ireland at the World Expo in Dubai in 2021.

Conor will be performing in Collins Barracks at 1pm on 26 January.

Tickets on sale now at tradfesttemplebar.com

Galway’s trad musicians ring in the New Year on TG4