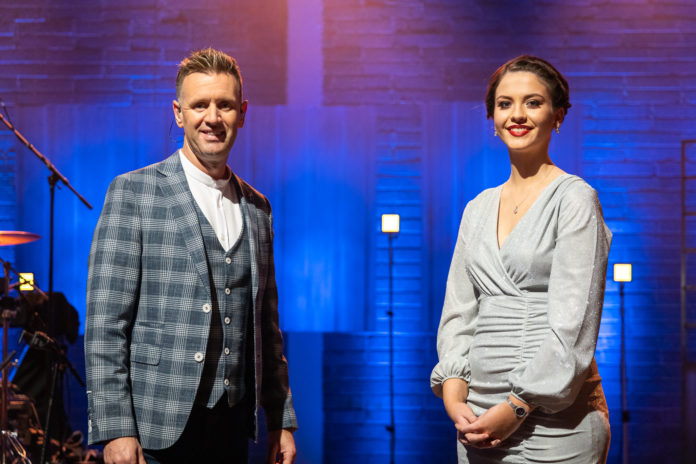 Mike Denver led his Tipperary contestant and University of Limerick Music Student Aishling Rafferty to win the 18th season of the show in the highly entertaining final in Claregalway this week.

Her distinctive country style, voice and stage presence, delivering stunning renditions of country classics,  “Who left the door to heaven open” and “You never can tell” enthralled TG4 audiences  and led to a strong popular audience vote in the final.

Mike Denver said that Glór na Tíre is the “perfect starting point” for a career in music, spoke highly of Aishling’s ability and drive.

“It’s the title to win to propel you forward in the industry and I’m absolutely thrilled for Aishling.”

“She has the ambition, the drive but most importantly the voice and the talent, it was a privilege to mentor her throughout the competition.”

There were three Galway singers in total competing in this year’s Glór na Tíre, Katelyn Molloy and Deirdre Keane were both be mentored by Ciarán Rosney, while Rachel Goode from Ballinasloe was also mentored by Mike Denver.

Aishling attributes her passion for country music from an early age, and excellent mentoring by Mike, as crucial to giving her a new found confidence to compete, and secure the much coveted TG4 Glór Tíre Title which has always been her ambition.

“This is beyond special to win the TG4 Glór Tíre title,” says Aishling Rafferty, “it’s been a dream of mine but the competition this year was high, I’m beyond thrilled.”

“It’s hugely important for my family and boyfriend who’ve all been such a massive support throughout the competition not to mention my wonderful mentor Mike Denver who’s backing and advice has been first class and he’s always so encouraging.”

Hailing from Knockshegowna, Roscrea in Tipperary, Aisling is from a family of  eight who’s support she’s hugely grateful for.

She plans on bringing all of them with her to share part of her prize of a trip to Portugual to perform with Mike Denver.

Currently studying  a Bachelor’s Degree in Voice at the World Music Academy of Music and Dance at the University of Limerick, Aishling has clear ambitions for a career in music.

The TG4 Glór Tíre  marked it’s 18th series with a new set and format and the 7 part series was filmed in Studio 5, Cue One in Claregalway.