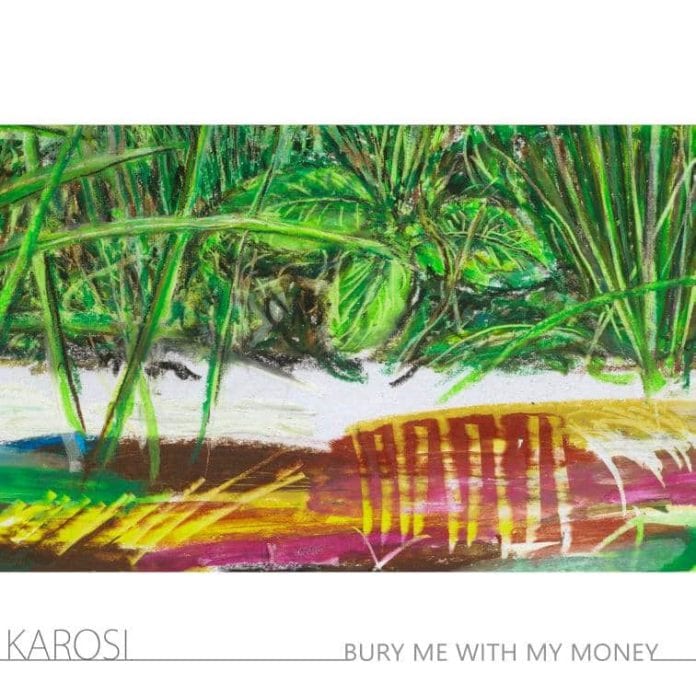 This week’s song of the week is Bleeding Out by Bury Me With My Money, from their debut EP, Karosi. Bleeding Out is driven from the start by a pulsing electronic bassline and a stripped back drum beat. The combination of two simple parts works wonderfully here. If either were elaborated on musically, their combined impact would likely suffer.

While so many artists fear simplicity, Bury Me With My Money value the sum of the parts above all else.

The band took shape when Tomas Concannon (formerly of Ka-Tet) let another stalwart of the Galway rock scene, Joseph Padfield (Race The Flux, Bannered Mare) in on his fledgling solo project.

The pair proved they had more in their locker than big riffs and distortion pedals by sitting down with synthesizers and letting their natural song writing ability guide them. The band has since been completed by Adam Downey, Oisin Brennan and Dylan Hooper.

The transition to synth based music seems to have been a liberating one, as the group have experimented with unique song structures and diverse instrumentation on all their releases to this point.

Allowing your instrumentation to inspire your lyricism, and vice versa, is a skill that many songwriters fail to master, but Tomás told me how that process occurred naturally when writing this track:

“It started with that driving bass and drums. That felt kinda sexy and dancy, so I added that arpeggiated synth and the mumble style vocal melody.

“The song flowed really easily from there. Lyrically it already felt sort of sleezy and the constant driving rythmn felt exhausting, which inspired the theme of constantly trying to impress or be noticed”

The theme of minimalism carries throughout, with different parts dropping in and out when necessary. The key is that the song always sounds full.

The fantastic vocal production means you don’t even notice that, at times, you’re only hearing vocals and drums. When all parts do combine, like some kind of new wave transformer, the result is magnificent.

Harmonising falsetto vocals intertwine with synth and bass melodies to provide an epic climax to the song, befitting of its 1980’s inspirations.

Bury Me With My Money will be releasing the next track from their Karosi EP, Warp, next month. If what I’ve heard so far is anything to go by, I’m looking forward to another exquisitely produced and expertly composed track.